Three-way tie for top spot at Scotties Tournament of Hearts

PENTICTON, B.C. – Mary-Anne Arsenault has been keeping her family, friends and ex-teammates up late at night in Nova Scotia this week. But they don’t mind as long as she keeps winning. And she is. Boy, is she. 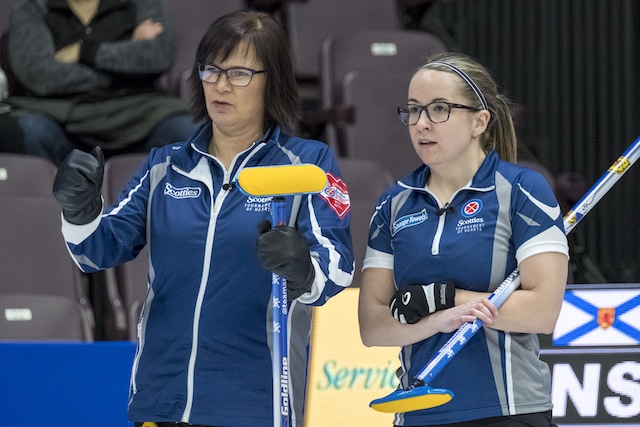 Arsenault’s team from Dartmouth won its seventh straight game downing British Columbia (Nanaimo), skipped by Kesa Van Osch, 10-4 Friday afternoon at the 2018 Scotties Tournament of Hearts. Nova Scotia is tied for first in the Championship Pool standings with Team Wild Card and Manitoba at 8-2. That clinches at least a tiebreaker into the Page Playoffs for all of them heading into this evening’s final draw. “They were happy about that eight-end game (Thursday) night,” laughed Arsenault about her fans back home where evening draw games start at 11 p.m. AT. “Everyone’s playing well. We seemed to have a lull when we didn’t get things perfectly placed but the other team weren’t able to take advantage. We’ve been fortunate to get up early and be able to defend our leads. It would be sweet to do that again.” Arsenault, third Christina Black, second Jennifer Baxter, lead Jennifer Crouse, alternate Carole MacLean and coach Peter Corkum will face Hollie Duncan of Ontario (4-6) this evening (7 p.m. PT). “We’re just throwing well. We’ve worked hard the last couple of years. Jen (Baxter) and I have been together for 10 years now. (Jennifer Crouse) has been with us for two years. Christina now for four. We’ve just worked really hard and all our hard work is coming to fruition,” said Arsenault, 49. She is appearing in her 13th Scotties, having won five of them playing second for legendary skip Colleen Jones. The new 16-team format seems to have suited Nova Scotia. For the first five days, teams played every second draw and on three days only had to play once. That’s a change from the usual two-a-day pace with frequent back-to-back draws, sometimes playing three or four games in a row. “We did feel like we were at a relaxed kind of spiel at the beginning because it’s usually a grind at the beginning right off the bat. The last time we were here we had four games in a row. By that fourth game we had nothing left,” said Arsenault. “Something’s working, maybe that’s it.” 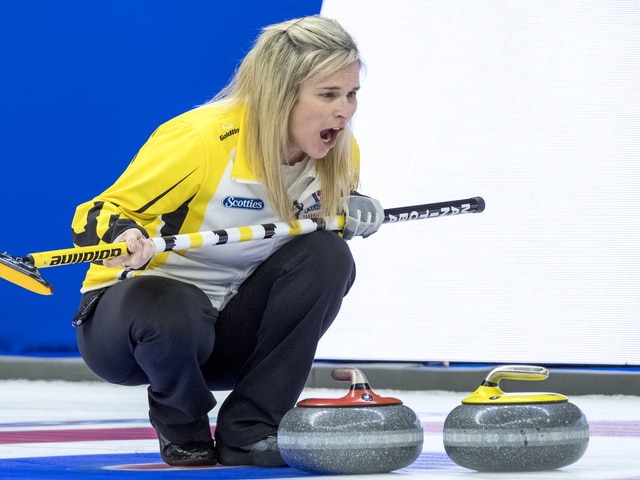 Something’s working again for Jennifer Jones and Manitoba (Winnipeg), too. They won their first five games, then lost two on Wednesday, but have rebounded with three wins. Friday afternoon, they handed Alberta its second consecutive loss, winning 6-2. Skip Casey Scheidegger conceded after six ends. “A little surprised,” said Jones of Scheidegger shaking hands. “In a way (she could understand) both teams have big games tonight, so it’s nice to have a bit more of a break. Maybe that’s what they were thinking.” Manitoba will take on Team Canada (6-4), skipped by Michelle Englot (Winnipeg) tonight while Alberta faces the Wild Card squad (East St. Paul, Man.) skipped by Kerri Einarson. Canada stayed alive by handing Einarson her second loss 8-5. Northern Ontario (Sudbury), skipped by Tracy Fleury is tied for fourth with Alberta (Lethbridge/Grande Prairie) at 7-3 after defeating Duncan 8-6. Fleury faces British Columbia (4-6) this evening. The 2018 Scotties Tournament of Hearts continues with draws today at 7 p.m. (all times PST). Live scoring, standings and statistics for the 2018 Scotties Tournament of Hearts are available at www.curling.ca/scoreboard/ TSN and RDS2 (streamed on ESPN3 in the United States) will provide complete coverage of the 2018 Scotties Tournament of Hearts. Go to www.tsn.ca/2017-18-curling-broadcast-schedule-1.593081 for the complete schedule. For ticket information for the 2018 Scotties Tournament of Hearts, go to www.curling.ca/2018scotties/tickets/ This story will be available in French as soon as possible at www.curling.ca/2018scotties/category/nouvelles/?lang=fr