We all knew the first Olympic mixed doubles competition wasn’t going to be easy. Yes, we’re disappointed to lose this morning against Norway, but they really played great. 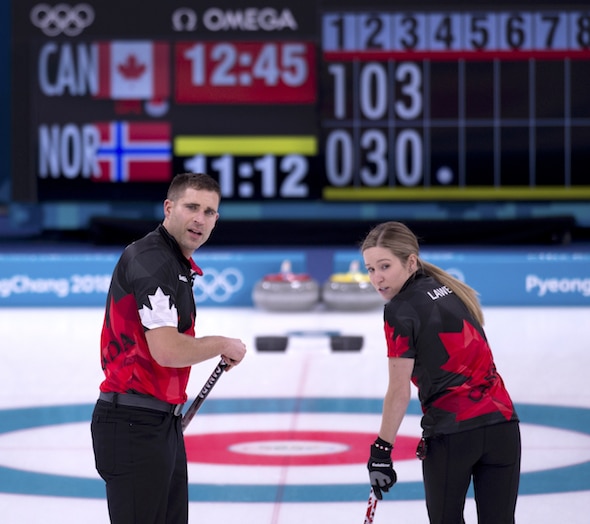 John Morris and Kaitlyn Lawes check out the situation during their game against Norway on Thursday in Gangneung. (Photo, World Curling Federation/Curling Canada/Michael Burns)

When it looked like we had a big end building, they’d come out with a really great shot, like the one in the second end when they scored three.

So we’re just kind of learning about what the ice and rocks are doing, and how we can and can’t throw the rock. There were still a lot of positives we could take from that game, and we’re looking forward to tonight’s battle against the U.S. (6 a.m. ET; TSN).

During the media interviews, someone mentioned that it was the first time John and I had ever lost at the Olympics; it’s all good. It’s hard to go through any event, especially mixed doubles, undefeated. We had some losses at the mixed doubles Trials in Portage la Prairie and we were able to bounce back, so we’ll learn from this and use our experience to take us forward.

And your backs are always going to be against the wall the whole week because other teams are going to be firing at us; every team wants to beat us. 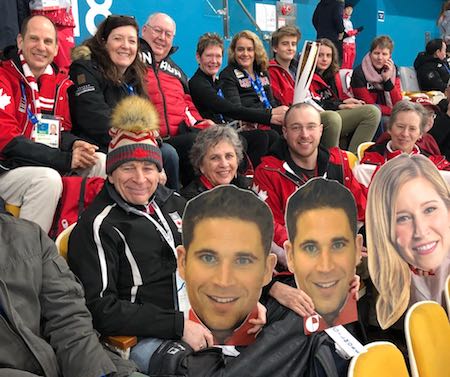 The atmosphere in the arena was wonderful; there was a lot for support for the Korean team, and it was really great to hear that cheering.

It was also nice to see some red jackets up there cheering for Canada. I heard that the Governor-General Julie Payette and the Canadian Ambassador to Korea Eric Walsh were there, and so was Anne Merklinger from Own the Podium. We really appreciate their support.

Our families were also here, and whenever you travel overseas to compete, it’s so nice to have your family close by. John’s dad Earle and mom Maureen were there, and so was my mom Cheryl and my brother Kevin.

My boyfriend Stephan will be arriving tomorrow. He plays professional hockey in Norway, and he was supposed to be here this morning, but his flight was cancelled so he’s stuck in Paris right now. But good things are worth waiting for.

We’ll have something to eat now, get some rest, and we’ll be ready to go tonight against Becca and Matt from the U.S. We’re good friends with them, and we know they’re great players, so we’re really looking forward to tonight’s game.

Thanks to all of the fans for your support!