Mary Anne LaRocque-Ouamar is on one lucky roll. 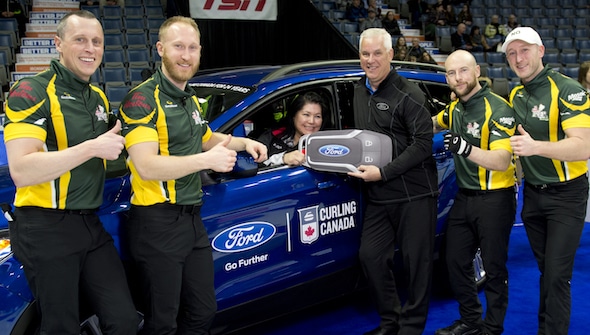 The Regina resident won a two-year lease on a 2018 Ford Escape, thanks to Team Northern Ontario’s winning performance Friday in the Ford Hot Shots competition which kicks off the Tim Horton Brier, presented by Mosaic.

And that follows on the heels of even better news for her and her husband, who recently received an interview for a job he’s been after for some time.

“All the stars are lining up for my husband and I,” said LaRocque-Ouamar. “He’s a barber and has that job interview coming up,. Now this. The timing is right.”

After the preliminary round pared the teams down to four for Friday afternoon’s final round, LaRocque-Ouamar found out she would be paired with Northern Ontario skipped by Brad Jacobs.

She was thrilled. And why not? Jacobs is a former Tim Hortons Brier winner and the 2014 Olympic gold-medal champion.

“I thought I had a shot,” said LaRocque-Ouamar. “But after I saw their first shot, where they got like one, I thought OK, it’s an even field and I kept watching, my heart rate going up. I kept saying, ‘when is this going to be over?’ I was so excited.”

Jacobs and his teammates third Ryan Fry, second E.J. Harnden and lead Ryan Harnden were a machine in the Ford Hot Shots final, piling up points at a steady rate. They always had a comfortable lead and refused to let anybody get too close.

LaRocque-Ouamar said there’s no doubt whom she will be pulling for in the Tim Hortons Brier, even though she is from Regina.

“Northern Ontario, of course,” she smiled. “That’s my team now. People will forgive me.”

This year, instead of an individual skills contest like the 23 previous years, the Ford Hot Shots was converted to a team event. The top scorer used to get a lease on a new Ford vehicle, but this year Jacobs, as the winning team, received $15,000 while a lucky fan, LaRocque-Ouamar, won a two-year lease on a Ford Escape SE.

Norrthern Ontario was particularly adept at the around-the-horn shot, scoring 16 out of a possible 20 points.

Jacobs was pleased with the cash reward but admitted here’s here to win the Tim Hortons Brier.

“The Ford Hot Shots is always a fun competition for the curlers,” said Jacobs. “It’s a good little warm-up to get the competitive juics flowing.   It was really neat to win the car for Mary-Anne and also win a little bit of cash before the event starts.”

“I was the bum on the team,” he said. “Almost everybody was perfect. Ryan and E.J. made almost everything in front of me. They made it really easy to win this competition.”

The other three fans from Saskatchewan – Joanne Zumack of Glen Harbour and Regina’s Wayne Wenaus and Corrine Boivin-Englund – paired with the team finalists received $500 to make a donation to a local charity of their choice.