NORTH BAY, Ont. — It was a rematch of the 2018 Olympic gold-medal final and the result was the same: Sweden’s Anna Hasselborg beat South Korea’s EunJung Kim, although this time the game was much closer. 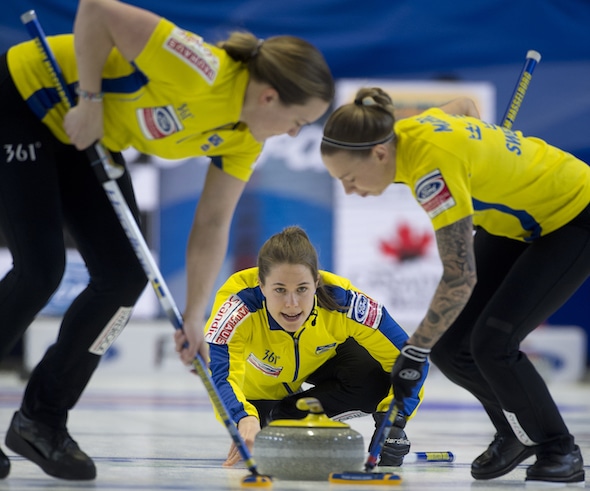 In a game that saw both teams inconsistent with their shooting, Hasselborg made the key shots when needed to give Sweden a 9-7 victory to remain unbeaten and atop the standings at the 2018 Ford World Women’s Curling Championship. While the crowd at the North Bay Memorial Gardens was aware they were watching the Olympic finalists, Hasselborg didn’t look at it as a rematch. “We play these teams so many times, so they are more Team Kim to me than they are Olympic finalists,” she said. “We play all these teams on tour all the time, so you know them all very well.” The result left only two unbeaten teams after eight draws of the round-robin: Canada’s Jennifer Jones and Hasselborg, both Olympic gold medallists. Sweden is at 5-0 and Jones, who won Olympic gold in 2014, is 4-0. The loss was the first for South Korea, 3-1. Hasselborg, playing in her first world championship, said the team is tired after the hectic schedule of the last month. “We know that we are tired and that we need to try to recharge and focus and we’re doing just that now,” she said. “We’re going to keep going and try to relax between games.” Sweden won the Olympic final 8-3 and Hasselborg, backed by third Sara McManus second Agnes Knochenhauer, lead Sofia Mabergs, alternate Jennie Wahlin and coach Maria Pritz, looked like she was headed for a similar result Monday. The Swedes scored three in the first end, with the hammer, and then stole two in the third after a blank second. Sweden handed South Korea opportunities to get the third end set with three straight miscues — a flash and two half-misses. But Hasselborg bailed out her team with a tight double with her final stone and Kim’s last-rock hit-and-stick was wide to leave Sweden with the deuce and a 5-0 lead. “In a 10-end game you can not expect to hold a 5-0 lead the whole way,” said Hasselborg. “You know they will take their deuce, especially when you play a defensive game, which you have to do when you’re five up. I think we controlled the scoreboard, not letting any steals get on there. And three-up coming home you can’t ask for a more satisfying scoreboard.”

Kim got two of those back in the fourth but Sweden took one in the fifth for a 6-2 lead at the break. Another miss by Sweden left Kim with an easy draw for two in the sixth. The teams traded deuces in the seventh and eighth and singles in the ninth and 10th. In the other evening games Binia Feltscher of Switzerland (2-3) scored triples in the third and fifth ends and four in the seventh to whip Hannah Fleming (0-5) of Scotland 10-2, Victoria Moiseeva of Russia (3-2) beat Yilun Jiang of China (2-3) 7-4 and Anna Kubešková of the Czech Republic (3-2) scored four in an extra end for an 11-7 win over Diana Gaspari of Italy (2-3). Canada, Japan’s Tori Koana (3-1), Jamie Sinclair of the U.S. (2-3), Denmark’s Angelina Jensen (1-3) and Germany’s Daniela Jentsch (0-4) had the evening byes. The 2018 Ford World Women’s Curling Championship continues with draws Tuesday at 9 a.m., 2 p.m. and 7 p.m. and xxx p.m. (all times ET). Live scoring, standings and statistics for the 2018 Ford World Women’s are available at www.worldcurling.org/wwcc2018/livescores TSN and RDS2 will provide complete coverage of Canada’s games at the 2018 Ford World Women’s. Go to www.tsn.ca/2017-18-curling-broadcast-schedule-1.593081 for the complete schedule. For ticket information for the 2018 Ford World Women’s, go to www.curling.ca/2018worldwomen/tickets/ This story will be available in French as soon as possible at www.curling.ca/2018worldwomen/?lang=fr