LAS VEGAS — It may have taken longer than a pro-Canadian crowd at the Orleans Arena had expected, but in the end, it was a familiar result for Brad Gushue and his St. John’s team at the 2018 361° World Men’s Curling Championship, presented by Ford of Canada. 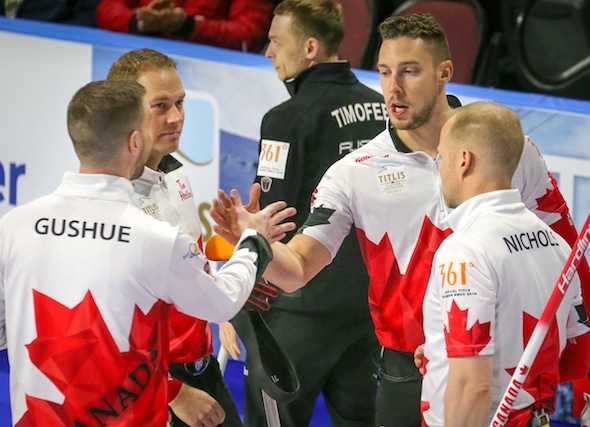 Gushue and Co. opened their gold-medal title defence on Saturday afternoon with a 7-6 win over a scrappy Russian team skipped by Aleksei Timofeev.

That pulled the Gushue team to within three victories of Don Duguid’s single-team record of 17 straight wins, when his Winnipeg team prevailed at both the 1970 and 1971 World Championships with perfect records.

The record for a country is 40 straight wins, set by Canada’s Ron Northcott, Duguid, Orest Meleschuk and Harvey Mazinke in a stretch that lasted from 1969 through 1973, ended when Mazinke lost in the gold-medal game of the 1973 world championship.

“It was nice to get the win; it wasn’t solid, but a win’s a win,” said Gushue. “I think once we get a couple games under our belt, those mistakes will go away.”

The Canadians took an early lead when Gushue made an open hit to score three in the first end, and it was 5-1 after four ends.

Timofeev, who played third for the winless Russian team last year in Edmonton, started the comeback with a fifth-end deuce, and added stolen singles in the sixth and seventh ends to tie the game.

“After we gave up the two, and then the two steals, it kind of felt like it was slipping away a little bit,” admitted Gushue. “The middle of the game, the ice changed and they picked up on it way faster than us. They played really well in the middle of the game, made some good freezes and put a lot of pressure on us. It seemed like we’d have a half-shot to turn an end around and they’d turn around and make a great one on top of it to switch the momentum.” 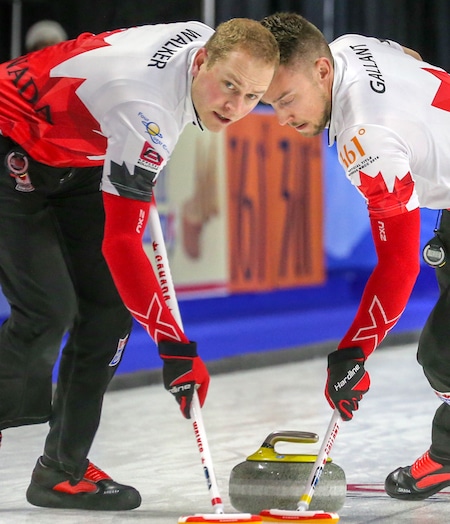 But the comeback was effectively snuffed out in the eighth end thanks to a wonderful come-around draw from Nichols to corner-freeze, buried, to a Russian stone. That set up a deuce, and eventually the victory for Canada.

It was a return to focusing on curling for Team Canada, which arrived in Las Vegas on Wednesday and much of Thursday taking in the Vegas experience.

“It’s been fun; the four-and-a-half-hour time difference was the biggest adjustment for us, and we’ve been trying to get caught up on some sleep and synced up to this time zone,” said Gushue. “We’ve had an opportunity to enjoy some of the things that Las Vegas has to offer, but for us, we’re trying to play our best here. We’re pretty focused, we’re pretty disciplined and trying to do the right things.”

Canada is back on the ice on Saturday evening at 9:30 p.m. ET against Scotland’s Bruce Mouat, who had an opening-round bye.

In the other opening-round games, Sweden’s Niklas Edin — who lost the gold-medal game to Team Gushue last year in Edmonton — was a 6-5 winner over Germany’s Alexander Baumann; South Korea’s Chang-min Kim stole two in the ninth end and one more in the 10th for a 7-4 win over the Netherland’s Jaap Van Dorp; and China’s Dejia Zou shaded Marc Pfister of Switzerland 6-5.