LAS VEGAS — Playoff tickets have been booked; now it’s a matter of where Team Canada lands in the playoff picture at the  2018 361° World Men’s Curling Championship, presented by Ford of Canada. 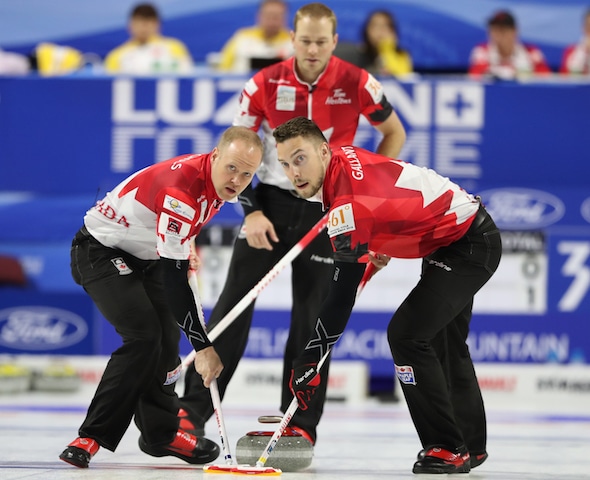 All three teams have guaranteed playoff berths, but with the top two teams in the round-robin standings assured of byes straight to Saturday’s semifinals, there is still plenty on the line for all three teams.

“One discussion we’ll have right now is to be as precise as possible tonight against the U.S. and build into tomorrow, and eventually into the weekend,” said Gushue. “I just want to see us to continue to play a little bit better and get a little bit more sharp. I feel like if we play the way we’re capable of playing, whether we have hammer (in the playoff games) or not, it shouldn’t matter.”

The Chinese pushed the Canadians to the limit on Thursday; Canada did manage to push through for a three in the fifth end to take a 4-2 lead, but China was able to fight back to tie it with a single in the sixth end and a stolen single in the seventh thanks to two wonderful shots from Zou.

But Canada built a nice end in the eighth and it paid off with Gushue drawing for three, and the win was secured two ends later when China was run out of rocks.

“I thought we actually played pretty good; we had some ends set up and kind of let them slip later on in the ends. But overall, it was good, and a win’s a win, which is the main thing,” said Gushue. “Obviously, we’re not playing up to the standard we’ve kind of had over the last three or four years, but it feels like the teams we’re playing against are playing well. We’re not getting those big misses; you look across the ice (at other games), and you see some of them — they don’t seem to be happening too much to us. Which is fine. I certainly feel like we can raise our level, which is what we need to do tonight and building for tomorrow against Sweden.” 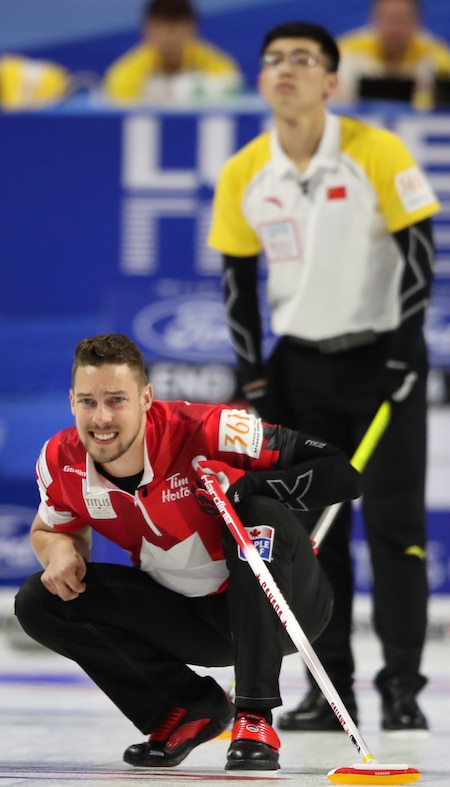 Canada will return to action on Thursday at 9:30 p.m. (all times Eastern) against Rich Ruohonen of the United States (3-6).

The 2017 gold-medal game rematch between Canada and Sweden goes Friday at 11:30 a.m.

“From our standpoint, we have to raise our level,” said Gushue. “But it doesn’t feel like we’re far off.”