LAS VEGAS — It was a bad-news, good-news kind of night for Canadian curling fans Sunday at Orleans Arena. 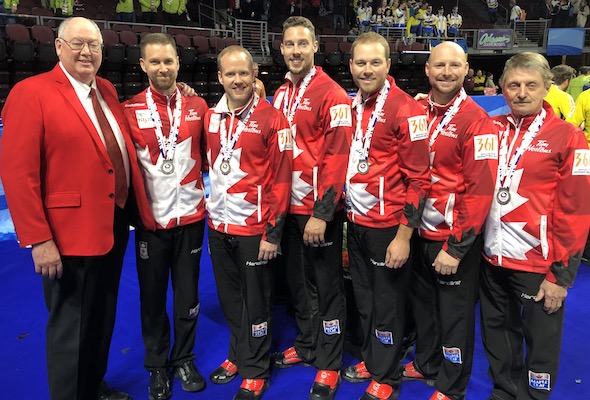 In the good news department, it was announced during the gold-medal game that the World Financial Group Continental Cup will be returning to Las Vegas next January. The four-day event, which features the world’s best curling teams in a variety of curling competitions, including mixed doubles, skins and traditional team games, will be played Jan. 17-20, 2019, at Orleans Arena. Teams, ticket details and information on room packages will be announced soon.

There’s a strong possibility that both teams on the ice Sunday night will be back in Vegas next January, but that was small consolation to Gushue, who was trying to become just the fifth skip ever to repeat as a world men’s champion.

“Real disappointed, obviously,”  said Gushue. “It  wasn’t our best effort, and Niklas and his team played great today. I guess the only positive thing to look at is that even if we had played a great game, they probably still would have won with how well they played. They were certainly the best team today.”

It was Edin’s third world men’s championship; he won in 2013 at Victoria and again two years later at Halifax.

Canada was coming off two playoff victories on Saturday, against Rich Ruohonen of the United States in the quarter-final and over Scotland’s Bruce Mouat in the semifinal.

But the Swedes, who topped the round-robin standings with an 11-1 record, proved too tough in the final. They blanked the first two ends before taking control in the third end when Edin made a lovely control-weight tap on a partially buried Canadian stone, and held his shooter to score two.

An end later, Sweden doubled its lead when Edin made a spectacular double-takeout, and Gushue was light on his draw for a single.

And in the fifth, it was one more for the Swedes when Gushue’s runback double-takeout attempt failed to curl enough. That was more than enough, although Edin remained wary of the comeback potential. 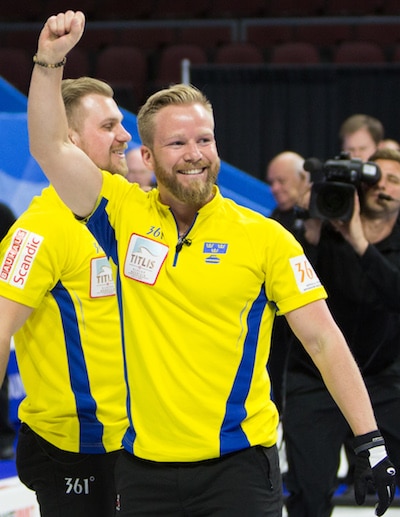 “You have to count on (Canada’s potential to come back),” said Edin, who was backed up by vice-skip Oskar Eriksson, second Rasmus Wranå, lead Christoffer Sundgren, alternate Henrik Leek, team coach Fredrik Lindberg and national coach Peja Lindholm. “They almost came back on us in the round robin as well, so we tried to keep up our game and not make any silly mistakes. We didn’t do that, so they had no chances of coming back after the lost the stolen two. We played close-to-perfect curling after that. Really happy with the win and how the boys played all week. It was a terrific week in Vegas.”

It was Sweden’s eighth world men’s gold medal — second only to the 36 won by Canada.

For Canada, it was a leading 53rd trip to the medal podium in the 60-year history of the World Men’s Championship.

And while it was a disappointing result, Gushue was able to keep his perspective considering events that unfolded in Canada prior to the team’s departure, and during the championship itself: the deaths of Nichols’ mother Helen and Gallant’s grandfather, Lorn Burke, as well as the tragic crash that killed 15 passengers on the Humboldt Broncos team bus.

“This is one bad week, and we’re at a good point when we’re saying our bad week was being silver-medallist at the world championship,” said Gushue. “We have to keep this in perspective — it’s one loss. It’s not going to define us, it’s not going to change our lives, and especially that’s gone on with our team the past week and a half, and back in our country. This is just a curling game.”

The team will head to Toronto on Tuesday for the Grand Slam Players’ Championships.

Earlier on Sunday, Scotland won the bronze medal with an 11-4 win over South Korea’s Chang-Min Kim.

The 2019 World Men’s Championship is scheduled for March 30-April at the ENMAX Centre in Lethbridge, Alta. Full-event ticket packages are now on sale; CLICK HERE for more information