KELOWNA, B.C. — An early loss was one thing, but an early TWO losses would have been entirely another for Team Canada at the 2018 Winn Rentals World Mixed Curling Championship. 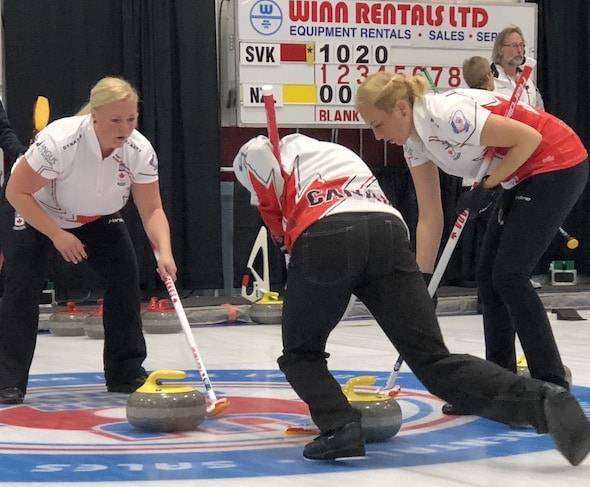 So Mike Anderson and his team from the Thornhill, Ont., Curling Club took that scenario out of the equation on Monday afternoon. Anderson, backed up vice-skip Danielle Inglis, second Sean Harrison, lead Lauren Harrison and coach Jim Waite put together a solid 6-3 win over Japan’s Taisei Kanai and improved to 3-1 in the 35-country competition.

That record has Canada in sole possession of the third and final playoff spot in its eight-team pool, with Norway’s Wilhelm Naess (4-0) and Slovakia’s Daniela Matulova (3-0) occupying the first two spots.

Canada needed Monday’s victory after suffering its first loss on Sunday afternoon, a 5-4 setback to Norway. 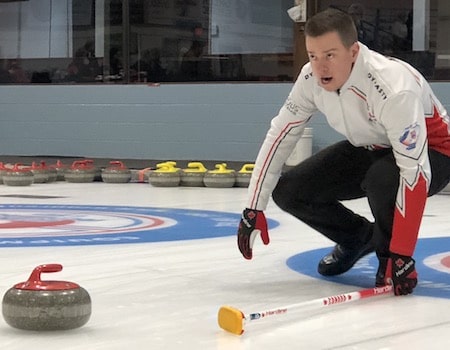 “It was very important to come back with a win (after Sunday’s loss), but it was also important that we started playing well again,” said Waite. “We played pretty well in that Norway game, but they played better than we did. In this game, we played well, but there were some minor mistakes — if we can correct those, we’ll be in really good shape.”

The Canadians were never truly threatened by Japan, but did let some chances get away when they had legitimate shots at a steal (particularly in the second fifth ends when Kanai was able to make draws to get out of trouble) or at scoring multiple points (a series of overthrown draws behind corner guards in the sixth end allowed Japan to make a freeze and Canada was held to a single point).

But with a 5-3 lead going into the seventh end, Canada finally managed to take control for good with a steal that was set up behind Inglis’s perfectly placed inturn draw that buried behind a short guard.

“We’re a little deep on shots when we shouldn’t be deep,” said Waite of the earlier narrow misses. “Mike is calling a good game, and I know it’s frustrating for him because he’s very aggressive. On this ice, if you get into an aggressive game with 14 rocks in play, you can get into big trouble (if you’re not precise with shots). But he called that game openly and we were in control the whole way.”

Canada, which is seeking its first gold medal at the world mixed championship (Trevor Bonot’s team from Thunder Bay, Ont., won silver a year ago in Champéry, Switzerland), will finish its round-robin assignment with three straight 8 a.m. PT games — Tuesday against New Zealand’s Dave Watt (0-3), Wednesday against Hungary’s Zoltan Palancsa (2-1) and Thursday against Slovakia. The playoffs get underway on Friday.

“I think the team is upwardly trending, and they like the ice,” said Waite. “They’re handling it well.”