The field is becoming more clear after seven completed draws at the 2019 Canadian Mixed Curling Championship at Winnipeg’s Fort Rouge Curling Club. Saskatchewan and Ontario lead their respective pools as the only undefeated teams, but plenty of others are hot on their tails as teams attempt to qualify for the Championship Pool and have an opportunity to make the playoffs. The round robin will conclude on Wednesday evening. 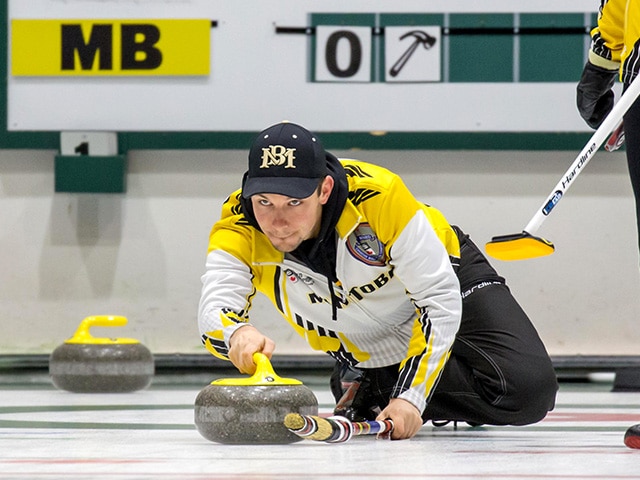 Northern Ontario’s Trevor Bonot (Port Arthur Curling Club, Thunder Bay) went two for two on Tuesday. He finished the day with a 6-2 win against Harold Walters from the RE/MAX Centre in St. John’s, N.L. The teams exchanged singles to start the game, before Bonot put up a steal of two in the fourth end. Newfoundland and Labrador were forced to one in the fifth end and Northern Ontario scored one in the sixth and seventh to claim the win. Northern Ontario has a 3-1 record while Newfoundland and Labrador sits at 1-3.

Quebec’s Félix Asselin started the day with a tough loss to Northern Ontario. But his team – comprised of players from the Glenmore, Laval-sur-le-Lac and Baie d’Urfé Curling Clubs – bested Nunavut’s Ed MacDonald (Iqaluit Curling Club) 10-2. Quebec had a steal of four in the fourth which helped guide the young team to victory. Quebec has a 3-1 record while Nunavut seeks its first victory of the championship.

Many believed the battle between the two undefeated teams in Pool B – Ontario’s Wayne Tuck (Ilderton Curling Club) and Alberta’s Kurt Balderston (Grande Prairie Curling Club) – would be one of the highlights of the night. But it was Ontario that would take advantage of some key Alberta errors for an 8-4 win. Tuck, with hammer, put plenty of pressure on Alberta in the fourth end. Balderston attempted a high-weight double to clear the house on his last shot, but it racked on a guard in front. This set Ontario up for a draw for three and 5-1 lead. Ontario added another score of three in the sixth end for added insurance. Ontario remains perfect at 4-0. Despite the loss, Balderston is still sitting well with a 3-1 record and will hope to meet Tuck on the ice again in the playoffs.

Alberta kept pace at the top of Pool B earlier in the day by doubling New Brunswick’s Chris Jeffrey (Gage Golf and Curling Association, Oromocto) with a score of 6-3. Half of Alberta’s points were scored with a three-ender in the second end. New Brunswick had been flawless up until that point, but now has a 2-1 record.

Saskatchewan’s Jason Ackerman (Highland Curling Club, Regina) started slow, but finished strong against Newfoundland and Labrador. Newfoundland and Labrador maintained a narrow lead until the fifth end, but Saskatchewan finished the game strong to remain undefeated at 3-0. First, Ackerman scored a deuce in the sixth, tying the game 4-4. In the seventh, his prairie-based team scored a steal of three and ran its opponents out of rocks in the final end to win 7-4.

Colin Kurz of Manitoba gave the hometown crowd plenty to feel good about. His team from the Assiniboine Memorial Curling Club defeated Yukon’s Bob Smallwood (Whitehorse Curling Club) 8-4. Kurz set the tone early with a score of four in the first end and limited Yukon’s scoring potential for the remainder of the game. Manitoba sits at 2-2 in Pool A, while Yukon trails behind at 1-2.

Action continues on Tuesday at 8 p.m. (all times CST) and Wednesday at 10 a.m.