In the month leading up to the 2018 Travelers Curling Club Championship, Nova Scotia’s Travis Stone received a text message from a former junior teammate of his that promised an on-ice reunion. 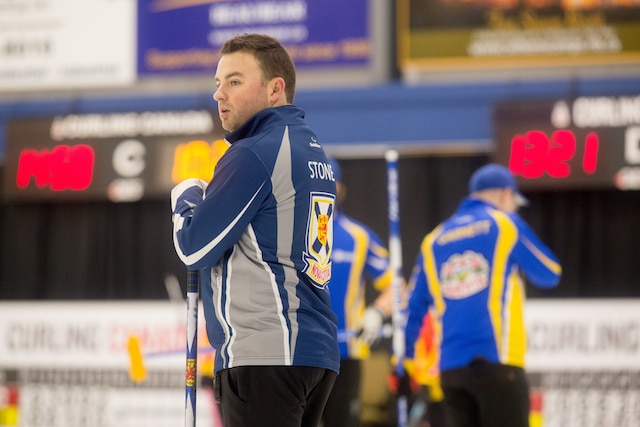 The message came from Alberta, from Stone’s former skip Scott Garnett. “He texted me right after he got off the ice from winning their Travelers provincial to say ‘OMG I guess we’re going to play each other in Miramichi!’” Stone explained. Until the start of the weeklong national championship at the Miramichi Curling Club, the two had not seen each other in over seven years. 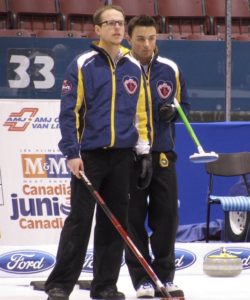 Garnett skipped his Strathmore Curling Club team to an Alberta championship just three weeks ago. Stone throws second on a team with skip Kurt Roach, third Mark MacNamara and lead Robin Nathanson. It was eight years ago that Garnett, who was then studying in Nova Scotia, and Stone captured a Nova Scotia junior championship together. The two played back end for the 2010 Nova Scotia junior team that narrowly missed the playoffs with an 8-4 record in Sorel Tracy, Quebec. On Wednesday they met as opponents on the ice in men’s Pool A play at the 2018 Travelers Curling Club Championship. “It was a nice little reunion out there,” Stone beamed after the game. “He threw really good. He made a couple of peels and ruined the game for me,” Garnett smiled while standing next to his former teammate. Garnett, third Jason Wilson, second Brennen Fule and lead Cory Campbell forced an extra end against the team from the Sydney Curling Club but weren’t able to prevail in the ninth end. Nova Scotia defeated Alberta 6-4. “He called and played a really good game. I know his team has only been together for a short period of time and they played so great,” Stone added before his team went on to pick up their fourth win against Nunavut later on Wednesday. Garnett’s mother, Lorelei, who represented British Columbia at the 1996 Scotties Tournament of Hearts, is the coach for Alberta. Nova Scotia is in a comfortable spot with a 4-1 record just behind Manitoba, who is 4-0 in Pool A. Garnett and his team were able to bounce back from the loss to his junior teammate later in the day with a win over Yukon. The team from Strathmore, Alta., is still in the playoff picture with a 2-2 record, tied with Quebec and Prince Edward Island. Yukon’s three losses and winless Nunavut round out the men’s Pool A standings. 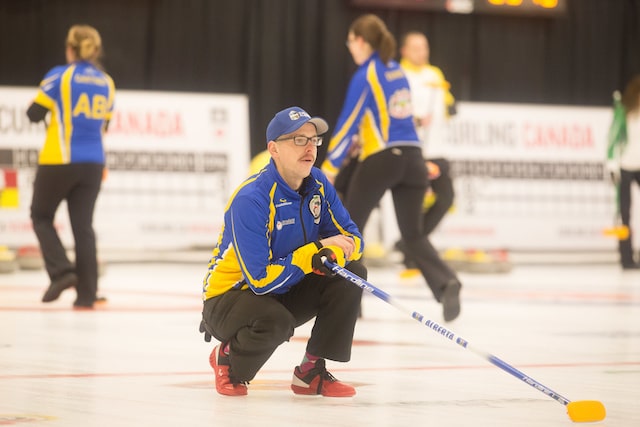 Garnett and Stone aren’t the only former teammates to face off in Miramichi this week. Mark Blanchard threw second stones for Manitoba’s Andrew Wickman in the 2016 Travelers Championship. After a move from Manitoba to Thunder Bay, Blanchard finds himself wearing Northern Ontario colours at this year’s event as Gary Weiss’ alternate player. How did Weiss think to pick up Blanchard as an alternate for his Northern Ontario team? They met and became friends at that same 2016 event in Kelowna, B.C. Hopes of Blanchard’s new team meeting his former team in the crossover playoffs are fading as Northern Ontario suffered a 7-3 loss to Ontario to fall to a 1-3 record on Wednesday night. The win keeps Ontario in third spot with a 3-1 record. British Columbia and Saskatchewan have yet to lose in Pool B, setting up an exciting match on Thursday, when the two teams will meet in Draw 13. New Brunswick slipped to 2-3 on Wednesday. Newfoundland and Labrador hold a 1-3 record heading into the final day of round robin on Thursday. Northwest Territories round out Pool B with a 0-5 record. Manitoba and Northwest Territories lead their respective pools with perfect records in the women’s division of the Travelers Championship. Manitoba has marched through Pool B with a 4-0 record. Yellowknife’s Sarah Stroeder and her team were all smiles and hugs after upsetting Saskatchewan on Wednesday evening and rhyming off their fourth straight win. Curlers are also coming together off the ice at the national event. They’re helping raise money to support youth curling across Canada through online donations to support their team as well as a silent auction, all in support of the Curling Canada Foundation. For more information on how to support your favourite team click here: https://www.curling.ca/2018travelers/fundraising/ The public is invited to visit the Miramichi Curling Club to bid on dozens of items in the silent auction. The auction closes Friday at 6:30 p.m. (all times Atlantic). The 14 men’s and 14 women’s teams are split into two seven-team round-robin pools. After a single round-robin, the top three teams in each pool will make the playoffs. The first-place teams will be seeded directly into the semifinals, Friday, Nov. 23, at 6:30 p.m. (all times Atlantic). The second- and third-place teams will meet in crossover quarter-finals Friday at 1:30 p.m., with the winners moving into the semis. The semifinal winners will play for gold, and the losers will play for bronze, Saturday, Nov. 24, at 9 a.m. Selected games from the 2018 Travelers Curling Club Championship will be live-streamed at www.curling.ca/2018travelers. Scores and standings from the event will be available at www.curling.ca/scoreboard. For draw times, team lineups and other event info, go to: www.curling.ca/2018travelers/