Fifth time’s a charm? Tyler Smith from Prince Edward Island hopes it could be at the 2019 New Holland Canadian Juniors in Prince Albert, Saskatchewan. Smith’s impressive curling career includes four previous appearances at the Canadian Juniors (2018, 2017, 2015, 2013), a trip to the 2017 Canadian Mixed, as well as two Canada Winter Games (CWG) appearances in 2011 and 2015. 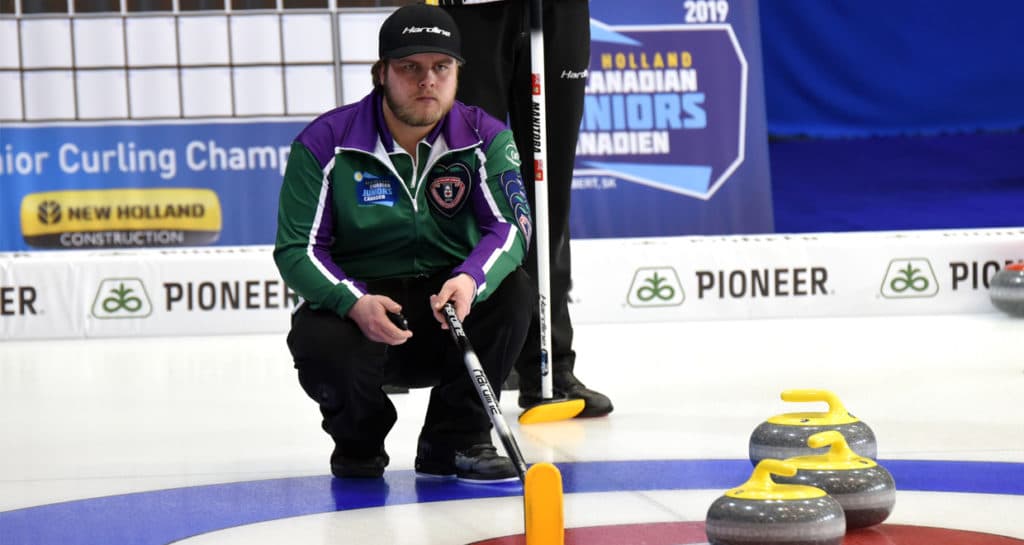 Though Smith’s team has struggled out of the gate in Prince Albert losing three of the first four games, he feels they have turned a corner with a 13-4 win over Northwest Territories. “We struggled big in the first few games while getting used to the big swing (in the ice),” said Smith. “(The ice) is not like at home, but we figured it out that game and played pretty well.” We first interviewed Smith back in 2014 (read the full article here) when he was already making waves on the junior scene. The two-time CWG appearances are particularly notable, as the event only occurs every four years. Smith attended his first event at age 11. “It was quite the event,” reminisced Smith about his first CWG experience. “We didn’t know what to expect. We just went out there and had fun, made a couple shots, won a few games.” “We made the playoffs in Prince George,” said Smith of his second CWG. “The experience of the first event really worked for the second one.” There are over 10 athletes from the 2019 New Holland Canadian Juniors who have also qualified for the CWG this year. 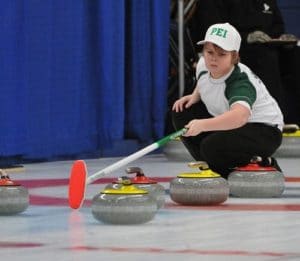 What advice would Smith offer the players heading to Red Deer? “Stay loose. Some teams when they go to a junior national or Canada Winter Games for the first time they are way too tense and over-focused,” said Smith. “It’s a mini-Olympics (with multiple sports disciplines) and you’ve got to just embrace the experience. Stay focused and relaxed.” Lauren Ferguson’s Prince Edward Island-based squad is one of the teams that will be heading to Red Deer next month. The team members are using this competition to hone their skills for arguably their biggest event of the season. “We’re learning lots of new things and having fun,” said P.E.I. third Katie Shaw. “It’s been a really positive experience for us.” Ferguson’s squad picked up its first win of the competition when they broke the game wide open with a steal of five in the sixth to cruise to an 11-5 win over Tyanna Bain from the Northwest Territories. The teams are now at 1-4 and 0-5 respectively. Also in women’s action, British Columbia’s Sarah Daniels defeated the Host team skipped by Skylar Ackerman. Daniels sits at second place in Pool A with a 4-1 record, while Ackerman drops to 0-5. Alberta’s Selena Sturmay posted a definitive 8-2 win over Thea Coburn’s Ontario team. Sturmay remains the lone undefeated team Pool A while Coburn stays in the middle of the pack with a 2-3 record. Quebec’s Laurie St-Georges made the hit for the 7-5 win over Sara England from Saskatchewan. Quebec moves to 5-1 while Saskatchewan goes to 3-2. It was a big win for the Quebec men, as they handed the two-time Canadian Junior silver-medallists from Northern Ontario their second loss of the competition. Both teams are now square at 2-2. Sam Steep’s Ontario team picked up its second win of the day over Yukon’s Trygg Jensen. Steep improves to 3-2 with Yukon dropping to 1-4. JT Ryan and his Manitoba squad continued to dominate with an 8-5 win over New Brunswick’s Jack Smeltzer. Manitoba is currently ranked first in Pool B with a 4-0 record while New Brunswick is tied for third at 2-2. A tight game between Saskatchewan’s Rylan’s Kleiter and Newfoundland and Labador’s Greg Blyde saw Kleiter edge Blyde out for an 8-6 win. Saskatchewan is sitting in second place in Pool A with a 4-1 record while Blyde drops to 2-3. Action continues at the 2019 New Holland Canadian Juniors with draws on Tuesday at 9 a.m., 2 p.m. and 7 p.m. (all times Central). Fourteen men’s and 14 women’s teams are competing, with two seven-team pools in each gender. Following Tuesday night’s games, the top four teams from each pool will move into the championship pools beginning Wednesday, while the other teams will play in seeding pool games to determine the final standings. Round-robin games at the 2019 New Holland Canadian Juniors are being streamed live exclusively on Curling Canada’s Facebook page. TSN/RDS2, the official broadcaster of Curling Canada’s Season of Champions, will provide live and exclusive coverage of the womenʼs and menʼs semifinals on Saturday, Jan. 26, and finals on Sunday, Jan. 27. The same games also will be streamed live in the U.S. on ESPN3. CLICK HERE for streaming and broadcast information. The winning teams Sunday will represent Canada at the 2019 World Junior Championships, Feb. 16-23 in Liverpool, N.S. The full scoreboard can be viewed at www.curling.ca/scoreboard/. For event information, visit www.curling.ca/2019juniors.