Tardi cruises through first round at New Holland Juniors

The defending champions, skipped by British Columbia’s Tyler Tardi, have been making it look effortless at the 2019 New Holland Canadian Junior Curling Championships in Prince Albert, Saskatchewan. Tardi, along with Sterling Middleton, Matthew Halland Alex Horvath, shut out the competition in the first round with a 6-0 record – no easy feat. 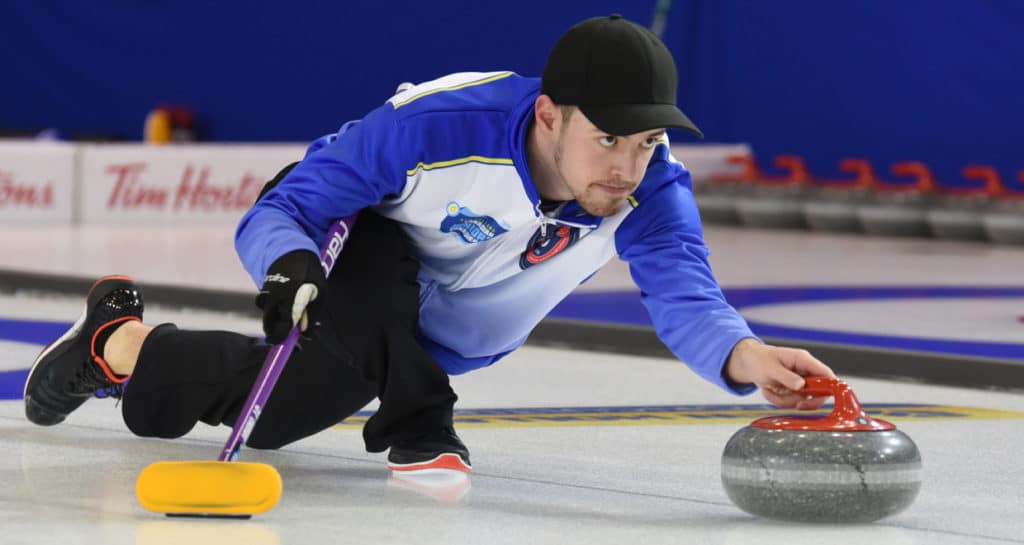 On paper, there’s no doubt this team is destined for success. Each player comes with a laundry list of curling accomplishments including Canadian championships, world championships and Youth Olympics Games gold medals, to name a few. Though it’s a very similar line-up to past championship teams, Hall, originally from Ontario, is a welcome new addition to the squad. Tardi cites the team’s chemistry as the key to their success this week. “It’s our team dynamics,” said Tardi. “We’re having a lot of fun out here. We’re staying upbeat and that’s been a big part of it.” 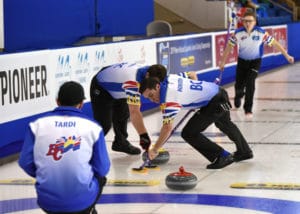 Hall couldn’t agree more, and says that it shows in the team’s performance this week. “We’ve really hit our stride,” said Hall. “We’ve been able to go out there and perform well in the first couple ends and get on top of our competition. We’re firing on all cylinders and it feels good.” Tardi and company finished off the first round with a 9-6 win over Alberta’s Desmond Young, meanwhile Saskatchewan’s Rylan Kleiter took down Yukon’s Trygg Jensen 10-2, and Greg Blyde’s Newfoundland and Labrador squad beat Nunavut’s Javen Komaksiutiksak 12-3. In Pool B men’s play, Vincent Roberge from Quebec defeated Nova Scotia’s Graeme Weagle 9-3, Tanner Horgan representing Northern Ontario took down Manitoba’s JT Ryan 7-4, and New Brunwick’s Jack Smeltzer snuck out a 9-7 win over Tyler Smith from P.E.I. The top four teams from each pool will move into the championship pool beginning Wednesday, while the other teams will play in seeding pool games to determine the final standings. Advancing from Pool A to the championship pool are B.C. (6-0), Saskatchewan (5-1) and, by virtue of having the best Last Stone Draw (LSD) of the teams tied at 3-3, Newfoundland and Labrador. In a tiebreaker for the fourth position are Ontario’s Sam Steep and Alberta’s Young. The loser of the tiebreaker will join Yukon (1-5) and Nunavut (0-6) in the seeding pool. The tiebreaker will be played at 9 a.m. Central and will be live-streamed on Curling Canada’s Facebook page. Heading to the championship round for Pool B, all with 4-2 records, are Quebec, Northern Ontario, Nova Scotia and Manitoba. New Brunwick (3-3), P.E.I. (2-4) and Northwest Territories’ Sawyer Kaeser (0-6) will compete in the seeding pool. On the women’s side in Pool A, the Nova Scotians, skipped by Kaitlyn Jones, secured their spot in the championship round with a 20-3 win over Nunavut’s Sadie Pinksen. It was a must-win situation for both Ontario’s Thea Coburn and Northern Ontario’s Kira Brunton, as they faced off in the last game of the first round. With both teams sitting at 2-3 and a berth to the championship round on the line, it was Brunton who prevailed in a 6-3 decision. In Pool B action, Justine Comeau’s team from New Brunswick locked up the 7-6 win over Manitoba’s Mackenzie Zacharias with a steal in end 10. The teams advancing to the championship round from Pool A are Alberta’s Selena Sturmay (6-0), Sarah Daniels’ squad from British Columbia (5-1), Nova Scotia (4-2) and Northern Ontario (3-3). Ontario (2-4), the Host team skipped by Skylar Ackerman (1-5) and Nunavut (0-6) all move into the seeding pool. Advancing to the championship round from Pool B are Manitoba (5-1), Laurie St-Georges from Quebec (5-1), Saskatchewan’s Sara England (4-2) and New Brunswick (4-2). Newfoundland and Labrador’s Mackenzie Glynn (2-4), Lauren Ferguson from P.E.I. (1-5) and Tyanna Bain representing Northwest Territories (0-6) will all compete in the seeding pool. Action continues at the 2019 New Holland Canadian Juniors with draws on Wednesday at 9 a.m., 2 p.m. and 7 p.m. (all times Central). Round-robin games at the 2019 New Holland Canadian Juniors are being streamed live exclusively on Curling Canada’s Facebook page. TSN/RDS2, the official broadcaster of Curling Canada’s Season of Champions, will provide live and exclusive coverage of the womenʼs and menʼs semifinals on Saturday, Jan. 26, and finals on Sunday, Jan. 27. The same games also will be streamed live in the U.S. on ESPN3. CLICK HERE for streaming and broadcast information. The winning teams Sunday will represent Canada at the 2019 World Junior Championships, Feb. 16-23 in Liverpool, N.S. The full scoreboard can be viewed at www.curling.ca/scoreboard/ For event information, visit www.curling.ca/2019juniors. This story will be posted in French as soon as possible at: www.curling.ca/?lang=fr