Manitoba’s dominance on the national junior men’s curling stage continues at the 2019 New Holland Canadian Juniors. Skips such as Matt Dunstone and Braden Calvert have collected numerous junior gold medals over the last six years and now JT Ryan will get the chance the make carve his own path after clinching his first appearance in the national junior men’s gold-medal game on Saturday night. 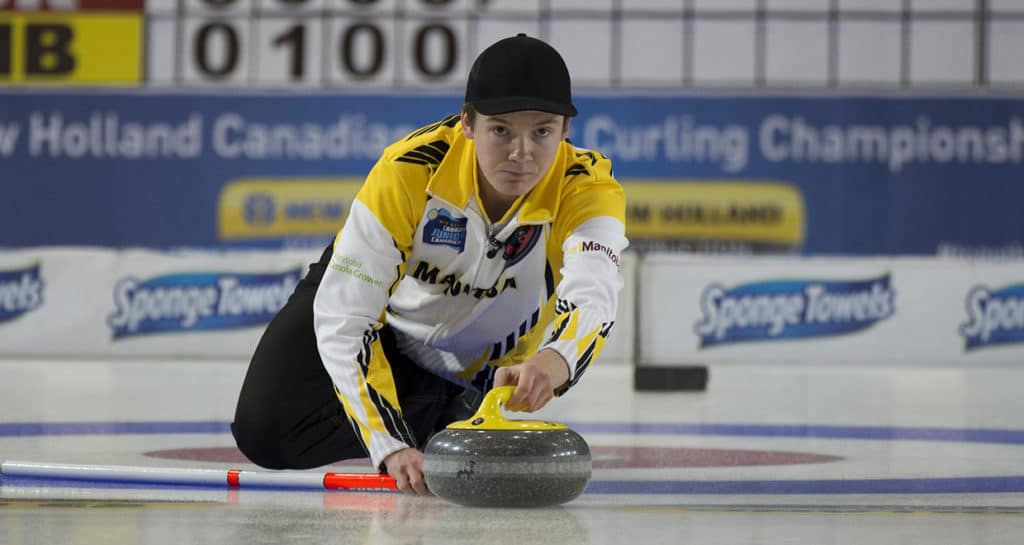 JT Ryan and his team from the Assiniboine Memorial Curling Club are advancing to the New Holland Canadian Juniors men’s final after defeating Rylan Kleiter in the semifinal on Saturday night at the Art Hauser Centre in Prince Albert, Sask. (Photo, Curling Canada/Michael Burns)

Ryan, in his third-consecutive appearance for Manitoba at the national event, defeated Saskatchewan’s Rylan Kleiter (Sutherland Curling Club, Saskatoon) 9-3 in the men’s semifinal at the Art Hauser Centre in Prince Albert, Sask.

Manitoba took advantage of the hammer in the seventh end to score three and began pulling away with the victory. Saskatchewan’s final hit attempt through a small port racked on a guard which allowed Ryan an opportunity to guide his stone – relatively untouched by the sweepers – into the four-foot. Manitoba took a 5-1 lead heading into the eighth end and didn’t look back.

It’s been a natural progression for Ryan who advanced to a tiebreaker in 2017, the semifinal in 2018 and now the final in 2019.

“One step better each time,” Ryan, a 21-year-old University of Winnipeg student, said. “Unfortunately I don’t have an extra year to take only one step further this year, so hopefully we can go out there tomorrow play the way we did (tonight) and see what happens.”

The win launches Ryan and his Assiniboine Memorial Curling Club (Winnipeg) team of vice-skip Jacques Gauthier, second Jordan Peters, lead Cole Chandler and coach John Lund into the final against British Columbia’s Tyler Tardi of the Langley and Victoria Curling Clubs on Sunday at 3 p.m. (all times Central). Manitoba defeated B.C. 7-4 in the Championship Pool game, but Ryan is expecting Tardi, the two-time defending national and reigning world champion, to come out strong.

After giving up three in the seventh end, Kleiter, vice-skip Trevor Johnson, second Joshua Mattern, lead Matthieu Taillon and coach Dean Kleiter got the crowd back into it in the eighth with a triple raise takeout to score two. But Manitoba responded with four in the ninth to end the game. 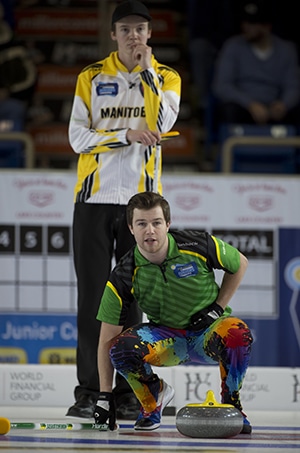 “I’d say early on we would have liked to get a few more rocks in play,” Kleiter said following the loss. “Things weren’t working very well and hat’s off to them. They played very well, making runbacks, they didn’t give us much room.”

Manitoba has won four of the last six national junior men’s title, including two by Dunstone (2013, ’16) and two by Calvert (2014, ’15). Of those appearances at the world juniors, Canada collected gold in 2015 and bronze in ’13 and ’16. Ryan played against the accomplished skips through most of his junior career, and he credits that to his progression as a junior curler.

“I think it just feeds you,” Ryan said of playing against those skips early in his career. “Because they’re guys you see every weekend playing in your local bonspiels. Then all of a sudden they’re on T.V. doing very well and getting recognition for being good, so it just makes it like ‘I want to be like him’ and it really drives you.”

Of course, the only two national men’s titles Manitoba hasn’t won over that six-year span has been the last two which Tardi has won. The British Columbia skip is seeking an unprecedented three junior titles in a row.

But first the undefeated Alberta women’s team skipped by Selena Sturmay of the Saville Community Sports Centre in Edmonton will play for gold against British Columbia’s Sarah Daniels of the Delta Thistle Curling Club in North Delta. Alberta clinched its spot in the final by finishing first overall in the Championship Pool while British Columbia played through a tiebreaker and semifinal game to advance to the final. The women’s gold medal game will begin at 10 a.m.

TSN/RDS2, the official broadcaster of Curling Canada’s Season of Champions, will provide live and exclusive coverage of the womenʼs and menʼs finals on Sunday, Jan. 27. The same games also will be streamed live in the U.S. on ESPN3. CLICK HERE for streaming and broadcast information.