SYDNEY, N.S. — In a game that saw both team struggle with draw weight, skip Casey Scheidegger of Lethbridge, Alta., made a last-rock draw to the four-foot Friday to score one for a 7-6 win over Team Kerri Einarson of Gimli, Man., and a berth in the 2019 Scotties Tournament of Hearts. 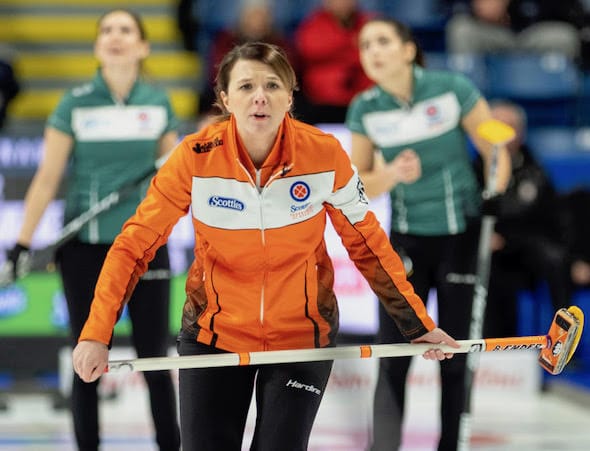 Casey Scheidegger and her Lethbridge, Alta., team prevailed in Friday night’s Wild Card game to advance to the main draw of the 2019 Scotties Tournament of Hearts. (Photo, Curling Canada/Andrew Klaver)

The game saw a number of pivotal misses, especially in the early ends, balanced by some excellent shots in the later ends. “The first five ends were a bit of a struggle,” said a jubilant Scheidegger. “After the fifth end we felt a lot better.” After giving up a deuce to Einarson in the eighth and a steal of one the ninth to tie the game, Scheidegger was faced with a draw for the win. “I felt good, nervous but good,” she said. “I felt confident, I knew the girls would get it there for me. We’ve struggled with that all season, making those big shots when we needed. All I wanted was a draw to the four-foot with my last shot and they gave it to me so I’m happy.” It took the Lethbridge team 36 hours to get to Sydney but it was worth in after earning their Scotties berth. For the Einarson squad it was a disappointing end. “I feel like I let my team down … it happens,” said Einarson. “The ice was much straighter than we had in practice yesterday but it was great, good speed;  I just didn’t catch up to it.” Draw weight was elusive for both teams early in the game. Scheidegger in the second and Einarson in the third both had chances for deuces but both missed last-rock draws – Scheidegger coming up short and Einarson wide and heavy. Einarson, third Val Sweeting, second Shannon Birchard, lead Briane Meilleur and coach Patti Wuthrich got a steal in four after a delicate tap-back to bury her shot rock and sit three. Scheidegger was light on an attempted angle raise but cut the steal to a single.

Scheidegger, third Cary-Anne McTaggart, second Jessie Haughian, lead Kristie Moore and alternate Susan O’Connor, pulled even in five when Scheidegger made a hit and stay for the game’s first deuce. They then stole one in seven, Scheidegger making a nearly perfect freeze and Einarson, curling just 34 per cent on draws, was light. They stole another two in seven when Einarson was heavy on her draw, leaving the Alberta crew with the deuce and a 6-3 edge. Facing four Einarson counters in the eighth, Scheidegger make a potential game-saving freeze to shot stone and Einarson was light on another draw for three and had to settle for two. “That was huge,” said Scheidegger. “If we miss that we’re probably giving up five so, big shot.” Scheidegger had a chance to maybe nail down the win in the ninth but her in-off for a possible deuce was wide, instead leaving Einarson with a steal of one and a 6-6 tie going into 10. The two teams qualified for the Wild Card game as the highest-ranking Canadian Team Ranking System teams that did not qualify for the Scotties through their provincial and territorial playdowns. Einarson lost the Manitoba final to Tracy Fleury while Scheidegger failed to qualify out of Alberta. The 2019 Scotties Tournament of Hearts officially begins with draws today at 2:30 and 7:30 p.m (all times AST). Live scoring, standings and statistics for the 2019 Scotties Tournament of Hearts are available at www.curling.ca/scoreboard/ TSN and RDS2 (streamed on ESPN3 in the United States) will provide complete coverage of the 2018 Scotties Tournament of Hearts. CLICK HERE for the complete schedule. For ticket information for the 2019 Scotties Tournament of Hearts, go to www.curling.ca/2019scotties/tickets/ This story will be available in French as soon as possible at www.curling.ca/2019scotties/category/nouvelles/?lang=fr