Sturmay back in the win column at World Juniors

Selena Sturmay is back in the win column after posting a 7-6 victory over USA’s Cait Flannery on Sunday night at the 2019 World Junior Curling Championships, in Liverpool, N.S. 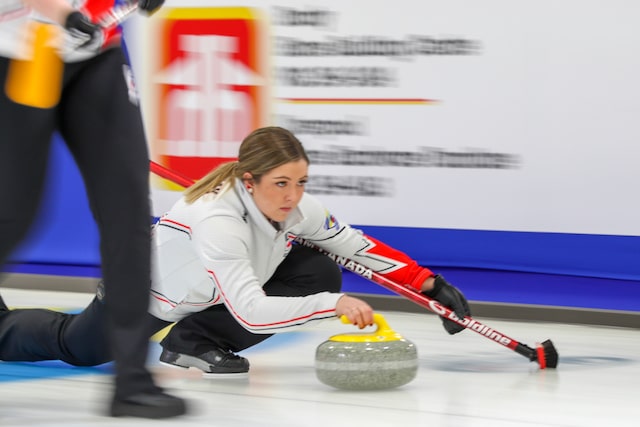 After losing a tight 6-5 battle to Scotland’s Lisa Davie on Sunday morning, Sturmay, with third Abby Marks, second Kate Goodhelpsen, lead Paige Papley, alternate Karlee Burgess and coach Amanda-Dawn St. Laurent, came out on Sunday night determined to turn things around against Flannery and her strong USA team. But it was a see-saw affair, with the teams trading singles early on and a couple of three-point ends later on. Tied 6-6 after eight, Canada blanked the ninth and after some careful rock placement in ten, Sturmay was left with an draw to the four-foot for the win. “We practice it all the time,” said Sturmay about the clutch draw. “Really in a tight game all you can expect is to be left a piece of the four-foot for the draw, so (I’m) pretty comfortable in that situation, and we all knew the time that we needed and the sweepers swept it really well so, yeah, it was great shot.” After the morning loss, Sturmay said the team met to talk about what they needed to do better, and the results showed in Sunday night’s game. “I think the biggest thing that we wanted to focus on was catching on to the ice early and capitalizing on mistakes, which I think we did a fairly good job of this game,” she said. Sturmay will be back on the ice on Monday with one game at 1 p.m. ET against Japan’s Ami Enami. Team Canada men will play twice on Monday, facing Switzerland’s Marco Hoesli at 8 a.m. ET, then Scotland’s Ross Whyte, the 2018 world junior silver medallist at 6 p.m. ET. (This game will be streamed on World Curling Federation’s Youtube channel.) Event information, including news and live scoring, are available at the event website, https://www.worldcurling.org/wjcc2019 As well, selected games will be streamed live on the World Curling Federation’s Youtube channel, https://www.worldcurling.org/wjcc2019/live-stream