BRANDON, Man. – It took until the final stone of the last game on Wednesday before Scott McDonald and Team Ontario earned a spot in the Championship Pool at the Tim Hortons Brier, presented by AGI. The 32-year-old from London, Ont., executed an angle raise take-out to score two in the tenth end for a 10-9 win over Jim Cotter of Team British Columbia (4-3, Vernon). The win improved Team Ontario’s won-loss record to 4-3 and it grabbed the fourth and final spot out of Pool B. A loss and McDonald and his Kingston, Ont., teammates,  third Jonathan Beuk, second Wesley Forget, lead Scott Chadwick, alternate Jeff Grant and coach Sean Turriff would have dropped into a tiebreaker situation with New Brunswick and Nova Scotia. 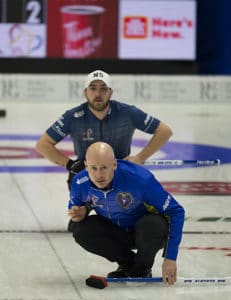 Kevin Koe ran the table in Pool B at the 2019 Tim Hortons Brier with a perfect 7-0 record. (Photo, Curling Canada/Michael Burns)

“It’s a big win for us,” McDonald said. “We knew we would have to battle against Jim’s team. They’re seasoned veterans, they’ve been here many times before … even when we were up 7-3 you’re never comfortable.” But the foursome managed to focus on the things in front of them and forget what happened when Cotter and teammates scored three in the sixth, stole one in seven and scored two in nine for a 9-8 lead. “Maybe we gave away a few opportunities and gave away the steal,” admitted McDonald. “My team had faith in me, it kept my confidence up and allowed us to make that shot in the tenth end when it mattered.” In the other final Pool B games Brad Gushue and Team Canada (6-1, St. John’s, N.L.) rolled past David St. Louis and Team Nunavut (0-7, Iqaluit) 11-2; Terry Odishaw and Team New Brunswick (3-4, Moncton) beat Jamie Koe and Team Northwest Territories (1-6, Yellowknife) 8-2; and Kevin Koe and Team Alberta (7-0, Calgary) nipped Stuart Thompson and Team Nova Scotia (3-4 Dartmouth) 7-6 to take top spot in the pool. The top four teams in the pool – Alberta, Canada, Ontario and British Columbia – advanced into the Championship Pool that begins Thursday against the top four teams from Pool A – Northern Ontario, Wild Card, Manitoba and Saskatchewan. The 2019 Tim Hortons Brier continues with draws on Wednesday at  2 p.m. and 7 p.m. (all times CST). Live scoring, standings and statistics for the 2019 Tim Hortons Brier are available at www.curling.ca/scoreboard/ TSN and RDS2 (streamed on ESPN3 in the United States) will provide complete coverage of the 2019 Tim Hortons Brier. CLICK HERE for the complete schedule. For ticket information for the 2019 Tim Hortons Brier, go to www.curling.ca/2019brier/tickets. This story will be available in French as soon as possible at www.curling.ca/2019brier/?lang=fr