SHERWOOD PARK, ALTA. — Northern Ontario’s Bella Croisier and her team became the first to win gold at both the Canada Winter Games and Canadian Under-18 Curling Championships in the same season. 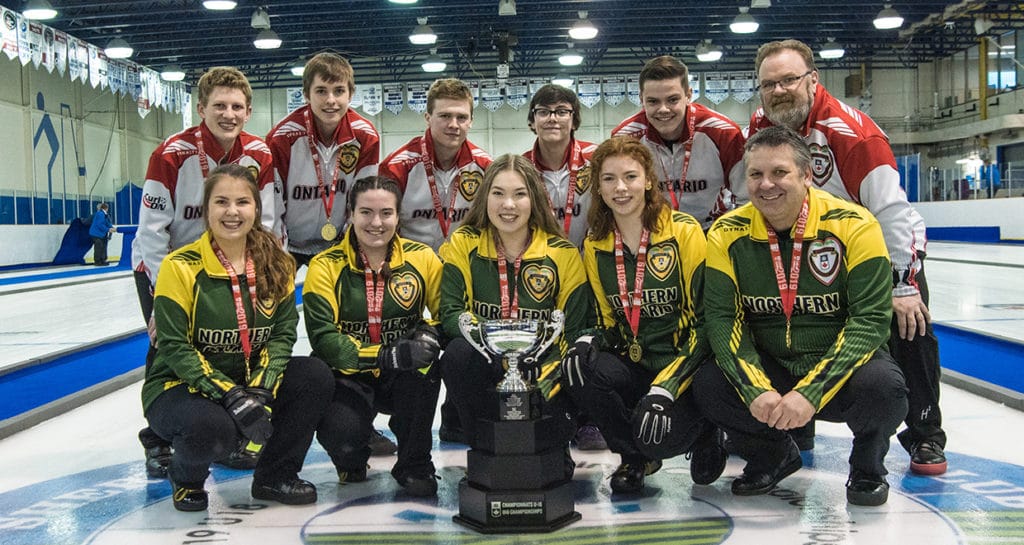 It’s the second national gold medal the team will add to its trophy case this season. Team Croisier won gold at the Canada Winter Games in Red Deer, Alta., in February 2019.

“What a way to end the season. We played really good all week and I’m pumped,” Croisier said.

“I’m so happy. Couldn’t believe we actually pulled it out. I don’t have any words,” she said, noting her team stayed positive throughout the week which helped lead to their success.

On the men’s side, Ontario’s Dylan Niepage of the Coldwater & District Curling Club and his team won their first national Under-18 title. Ontario defeated British Columbia’s Erik Colwell (Vernon/Kamloops/Invermere Curling Clubs) in a closely-contested 6-5 game.

With the game tied 2-2, Ontario capitalized on a steal of two in the third and a steal of one in the fourth for a 5-2 lead.

“It’s so surreal. The fact that we came into this even hoping to make the championship round and now to be wearing this gold medal is just so surreal,” Niepage said following the game.

Ontario started the week with one win and two losses before putting together seven straight wins to claim the gold medal.

“We’ve been so resilient. Even though we were down in the beginning of the week we fought back every single game,” he said.

One of Ontario’s initial losses came at the hand’s of Colwell. That 4-3 loss in the first game of the week was in the back of Niepage’s mind going into the final, but he believes his team improved a lot over the week.

“We had known we didn’t play our best. We knew if we played as well as we had been for the last four or five games that we’d have a pretty good shot of at least making it close and winning,” he said. “We knew it was going to be a close and tough game no matter what, so it was nice to end up on the winning side this time.”

Players and coaches awards were also handed out on Sunday. The Balance Plus Fair Play Awards (as voted on by umpires) were awarded to: