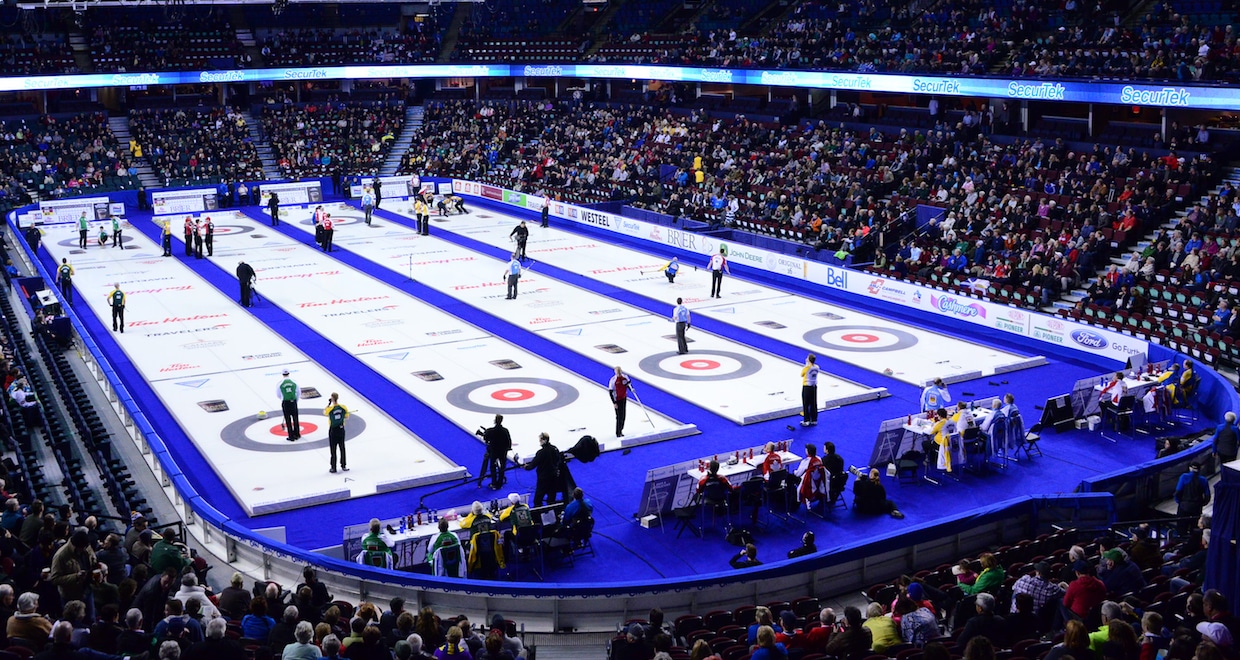 history of the brier

The Tim Hortons Brier is probably the truest of any Canadian sporting championship. Fifteen teams, representing each of Curling Canada’s 14 Member Associations as well as the defending champion Team Canada, compete for the Brier Tankard, the refurbished silver trophy that was presented to the winners of the Brier during Macdonald Tobacco’s 50-year sponsorship. The trophy was re-introduced in 2001 in Ottawa at the first Nokia Brier, when the famed Labatt Brier Tankard was retired after the 2000 Brier in Saskatoon.

It has been held in every province at least once and in 31 cities from coast-to-coast.

Manitoba has won a leading 27 Briers, the last by skip Jeff Stoughton in 2011 in London; Alberta is next with 26 victories.

Prince Edward Island, New Brunswick and the three Territories have yet to win.

In 1927, all games at the inaugural Canadian men’s curling championship were 14 ends. Two games actually went to a 15th end. Nova Scotia (skip Murray Macneill) won that first Brier in Toronto, in which eight teams competed, including ones from Toronto and Montreal.

Thousands of curlers attempt to qualify each year for the Brier through zone, district and eventually provincial championships, the latter taking place from late January through mid-February.

The Brier format was altered for the 2015 championship in Calgary, allowing for the first time the inclusion of the defending champion team — known as Team Canada, following the format used by the Scotties Tournament of Hearts — and giving each of the three Territories the right to enter separate teams. Prior to 2014, the Northwest Territories and Yukon Territory combined for a single team, while Nunavut did not have access to the championship. The change meant, for the first time, players from every Member Association in Canada had equitable access to the Brier.

The traditional 12-team round robin is preceded by a four-team pre-qualifying round to determine the 12th and final entry into the main round robin.

The round robin concludes on Friday morning. The playoff format is the Page System, whereby, after any tiebreakers are required to determine the first four teams, the first- and second-place teams meet in one playoff game, while the third-and-fourth place teams meet in another game.

The winner of the 1 vs. 2 match goes directly to Sunday’s final. The loser meets the winner of 3 vs. 4 in the semifinal for the right to compete in the championship final. The semifinal loser plays the 3 vs. 4 loser for the bronze medal.

From 1927-79, there was no playoff format. The Brier winner was the leader at the conclusion of the round robin, unless there was a tie for top spot, in which case a playoff game ensued.

Beginning with the first Labatt Brier in 1980, a playoff format was instituted, whereby the first-place finisher at the conclusion of the round robin advanced to the final, while the second- and third-place finishers met in a semifinal, with the winner also advancing to the final.

The Labatt Brewing Company announced its sponsorship of the Brier in 1978, taking over from Macdonald Tobacco, which had sponsored the first 50 Canadian men’s curling championships. The first Labatt Brier was held in Calgary in 1980 and was won by Rick Folk of Saskatoon.

At the 1997 Labatt Brier in Calgary, the brewery announced a further three-year commitment to the Canadian Men’s Curling Championship, which guaranteed title sponsorship through the year 2000.

At the 2000 Brier in Saskatoon, the Canadian Curling Association announced that Nokia, the world’s largest manufacturer of mobile communications, had signed a four-year deal to become the new title sponsor of the Canadian Men’s Curling Championship, beginning with the first Nokia Brier in Ottawa, March 3-11. Labatt became an official supplier to the Season of Champions.

The winning team was also presented (beginning in 2001) with the refurbished Brier Tankard, the original solid silver trophy first unveiled in 1927 at the inaugural Macdonald Brier.

Nokia decided not to renew its Brier sponsorship agreement at the conclusion of the 2004 championship. A new title sponsor, Tim Hortons, the largest quick service restaurant chain in Canada, was welcomed in a three-year agreement, beginning in 2005, with a three-year option. The first Tim Hortons Brier was staged at Rexall Place in Edmonton and produced a record attendance of 281,985. Tim Hortons’ current sponsorship of the Brier and the Roar of the Rings Canadian Curling Trials will run through the 2017-18 season.

Edmonton’s Randy Ferbey entered the record books in 2003 by winning his fifth Brier, the only player to do so.

In 2009, another Edmonton skip joined this elite group when Kevin Martin defended his 2008 title to add to previous championships in 1991 and 1997.

Russ Howard, formerly of Midland, Ont. – now residing in Moncton, N.B. Brunswick – holds the record for most games won at the skip position with 113 victories to his credit.

Howard’s former third, brother Glenn, established a record in 2013, competing in 196 games at the national championship, more than any other curler in the history of the game. He also set two new standards in 2013, representing Ontario for an eighth consecutive year and appearing in an unprecedented 15 Briers.

Fifteen teams have gone undefeated in the Brier, the last to do so being Kevin Martin of Alberta who accomplished the feat back-to-back in 2008 and 2009. On the other hand, 20 teams have failed to win a game during Brier week, the latest being the Northwest Territories (Jamie Koe) in 2015 in Calgary.

Among Brier records, the highest score for one team is 30, established in 1957, when Saskatchewan’s Garnet Campbell defeated New Brunswick’s Ken Everett, 30-3.

That game is also among three games with the highest total score, joining Ontario’s 17-16 win over New Brunswick in 1932 and Prince Edward Island’s 17-16 victory over Newfoundland in 1968.

Five games in Brier history have resulted in one team being shut out, the last in 1998, when Manitoba’s Dale Duguid defeated Prince Edward Island (Garth Mitchell), 8-0.

The lowest combined score for both teams is 3, all resulting in 2-1 victories. It has happened three times, the latest in 2000 when Manitoba (Jeff Stoughton) edged Prince Edward Island (Andrew Robinson).

The highest end score (count or steal) is seven. It’s happened on five occasions, the last being in 2000, when Prince Edward Island (Andrew Robinson) stole seven against Nova Scotia (Shawn Adams) en route to a 12-2 win.

There’s been one four-way tie for first (at the conclusion of the round robin), in 1993 in Ottawa, when Manitoba, British Columbia, Northern Ontario and Ontario finished on top with 8-3 records, prior to the playoffs.

Manitoba’s Kerry Burtnyk is the youngest winning skip, when his team took the 1981 Labatt Brier in Halifax. Burtnyk was 22 years (and four months) old. His team is also the youngest to win the Brier, averaging 22 years of age.

At the first Brier in 1927, six provinces were represented — New Brunswick, Northern Ontario, Nova Scotia, Ontario, Quebec and Saskatchewan, along with teams from Toronto and Montreal. In 1928, Alberta and Manitoba joined the championship. In 1932, city representation was dropped, but in 1936, Prince Edward Island and British Columbia were added, followed by Newfoundland in 1951 and Yukon/Northwest Territories in 1975.