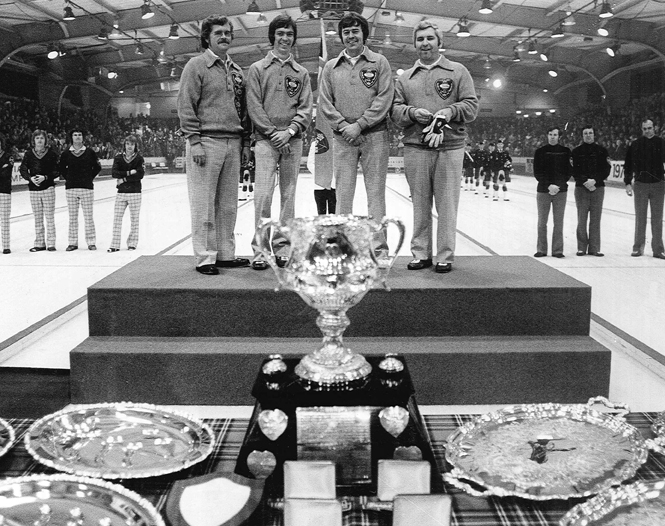 It was in 1975 that the first national men’s curling title was brought home to northwestern Ontario. The skip of this championship rink was Bill Tetley of Thunder Bay, who had competed in the 1957 and 1971 Briers before claiming this victory.

As the Tetley rink made its way up through the various levels of competition, it underwent a few changes in players. The original crew consisted of Tom Tod as third, Bill Hodgson Jr. as second and Peter Hnatiw as lead.

For the Northwestern Ontario playdowns, a 21-year-old Rick Lang replaced an injured Bill Hodgson Jr. as second. By the time the rink entered the Northern Ontario finals, Hodgson was back, but now Tod out due to illness and Lang took over as third. At the ‘Northern’s,’ Tetley, Hodgson, Hnatiw and Lang gained berth into the Brier with a 6-1 record.

The Tetley rink advanced to the Brier in Fredericton, New Brunswick, where they faced off against the Newfoundland team in their final round robin game to secure the title. In true curling drama, the game came down to the last draw, with Tetley ahead by one in the 10th and facing two shot rocks. A draw to the four-foot by Tetley claimed the national title for northwestern Ontario and marked the first Brier victory by a Northern Ontario rink in 25 years.

This victory earned the rink the right to represent Canada at the 1975 World Curling Championships, held in Perth, Scotland. Following an outstanding week of curling, the rink came out on top of the ten-country round-robin play, earning entry into the semi-finals against Switzerland’s Otto Danielli rink. Once again, the game came down to the 10th end. This time, however, it was Danielli that provided the clutch shot, claiming a 6-5 victory. Switzerland went on to claim the World Championship title by defeating the United States.