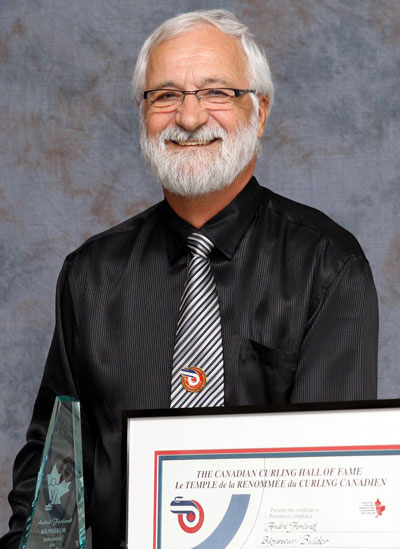 Born in Drumondville, Quebec, André Ferland has been both an innovator and high-profile coach in the sport of curling. He was also instrumental in popularizing the use of the stopwatch to measure takeout and draw weight, which helped sweepers determine rock speed at release, a fact of the game that is used worldwide today.

Ferland refined what was a novel approach to the delivery of the stone: the no-lift delivery. He advanced and standardized the technique that is now used extensively at all levels of curling. The no-lift delivery is arguably the most significant change in the sport in the last 30 years.

In the early 1990s, Ferland began experimenting with an oval brush head that swivelled from the handle. This mounted, carbon-fiber brush head made its debut at the 2002 Brier, leading to the birth of the Performance Brush that dominates the curling landscape today.

Ferland coached two Quebec junior men’s teams to national titles in 1980 and again in 1992. In total, he has coached teams at 10 Canadian junior championships, two Briers, three Scotties Tournament of Hearts and was a Canadian Curling Association national team leader at five world championships. He has also coached France at three world men’s championships and at the 2010 Olympic Winter Games.