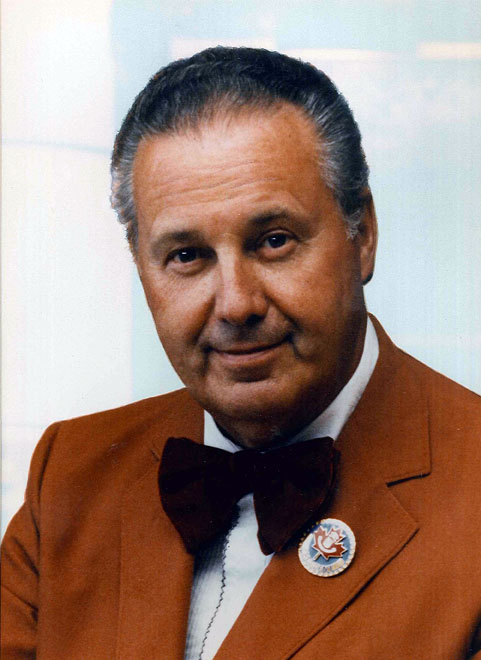 Tom Fisher, who served as president of the Canadian Curling Association in 1981-82, passed away at his some in Boynton Beach, Florida, on January 9, 2009. He was 87.

Fisher’s curling career began in Montreal in 1950, when he became a member of the Heather Curling Club. In 1954, Fisher was one of five founders of the Baie d’Urfé Curling Club, which finally held its first official meeting on July 1, 1959.

During those early years, Fisher held a number of positions in the montreal curling community, including the presidency of the Canadian branch of the Royal Caledonian Curling Club. So it was only natural for him to step forward and chair the first and only Brier ever held in Montreal.

The 1977 Brier was a memorable one for a number of reasons. First and foremost was that it was held in the spectacular Velodrome built for the 1976 Montreal Olympics. And, at the opening banquet, Macdonald Tobacco’s then president, David Stewart, announced that the tobacco company was withdrawing its sponsorship of the Brier after the 50th edition, scheduled for Ottawa in 1979. Fisher was elected third vice-president of the CCA later that week and, on the final day of the Brier, Jim Ursel gave Quebec its first men’s championship title. Later that year, Fisher was inducted as a member of the governor General’s Curling Club.

During his four years as vice-president, Fisher was extremely active as chairman of the relatively new public relations committee. It was during this time that statistics became a part of national curling championships and it was Fisher who led the charge to make it happen.

In 1981, Fisher was urged to establish two curling publications—the CCA’s fact book or media guide, and Curling Canada Magazine, which was renamed Extra End in 1995. In 1982, during Fisher’s presidency, the publications were produced for the first time.

Following his tenure on the CCA board, Fisher and his wife, Anne, became very involved in the collection of curling memorabilia for the hoped-for Canadian Curling Hall of Fame. Fisher also established and managed a traveling Curling Call of Fame display that was on site annually at the Brier and Hearts. The Fishers were awarded the Award of Achievement in 1992 for their exceptional work on the Hall of Fame.