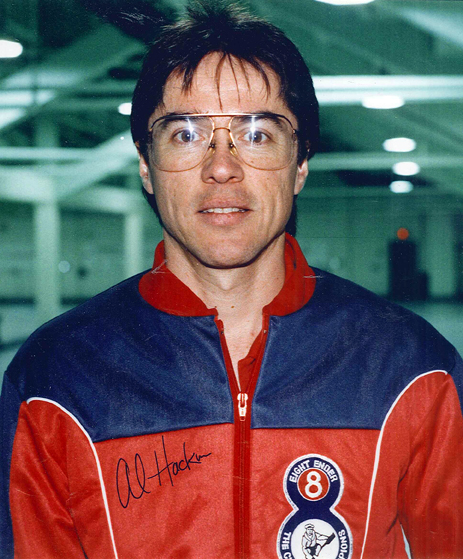 Without question, Al Hackner of Thunder Bay can be said to be the curler of the eighties. Al burst on the scene at the 1980 Labatt Brier where he upset Paul Gowsell in the series and lost to Rick Folk in the final. In 1981, Hackner returned again made the final only to be denied this time by Kerry Burtnyk who handed Hackner his second straight Brier final defeat. Making a third appearance in 1982, he left little doubt as he captured the Labatt Brier and the world curling championship.

In 1985, he returned to the Brier in Moncton and after winning a tie-breaker and the semi-final advanced to the final against Alberta’s Pat Ryan. During the tenth end of the final game, Hackner executed one of the greatest shots ever made in Canadian championship play to eventually steal the final from Ryan in an extra end. Hackner went on to claim his second Silver Broom in Glasgow, Scotland. Over the years Al “Iceman” Hackner has had many honours bestowed upon him. In his record-setting seventh trip to the Brier as skip in 1992, he established a second Brier record: 51 wins, most ever by a skip.