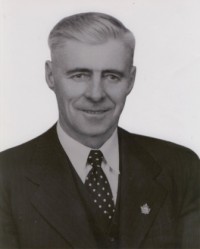 The late E.B. “Ole” Olson was an accomplished curler winning many bonspiels across Western Canada over a 40-year period. His greatest and most well known contributions to the sport of curling came from his many inventions.

Some of Ole Olson’s technical achievements include: the introduction of coloured ice to curling and hockey rinks in 1926; the publication of a booklet “The Art of Making True Curling Ice” in 1929; founder of Olson Curling Supplies, in Edmonton in 1933; the invention of the first individual curling rock sharpening machine in 1934 and he later perfected a larger machine in 1947; the invention of the standard rubber hack in 1939, which has allowed the sport to be played as we know it today; followed by other inventions such as the circle cutter, pebbling can, flooding tube, stone measure and power ice shaver.