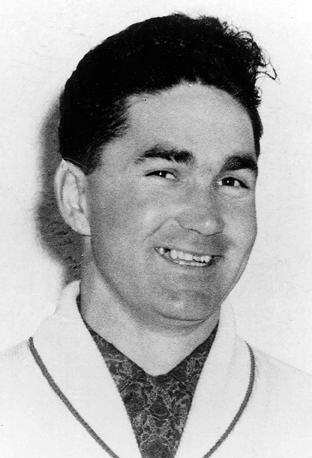 The team consisted of two brothers (skip Ernie and Garnet and their two cousins, Arnold and Wes.) They won the 1959, 1960, 1962 and 1963 Briers as well as their corresponding Scotch Cups (the World Championship at the time). They would play in another Brier in 1964, where they were runners up to Lyall Dagg’s British Columbia team.

Richardson was born in Stoughton, Saskatchewan and moved to Regina in 1945. He attended Davin Elementary School and Balfour Collegiate. He trained as a carpenter at the Saskatchewan Institute of Applied Science and Technology in Moose Jaw, Saskatchewan. After working for 35 years as a carpenter, he moved on to become a realtor, for Monarch Homes, Block Brothers, and finally for the Sutton Group. Richardson died on January 21, 2016 in Regina of complications from a rare form of Parkinson’s Disease. He was married to Kathleen (Kay) Richardson, and had two children.

Garnet ‘Sam’ Richardson was elected into the Canadian Curling Hall of Fame in 1973.