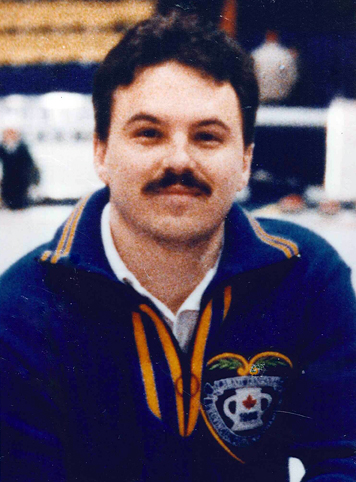 Early years with Pat Ryan – Ferbey participated in his first Brier in 1987 as a third for Pat Ryan. His first Brier would be a disappointment, as they finished with a 6–5 record. The next year however, Ferbey, Ryan and their team Alberta mates Don Walchuk and Don McKenzie won the Brier, and were thus crowned Canadian champions defeating Eugene Hritzuk of Saskatchewan 8–7 in the final.

At the 1988 Worlds, team Ryan won the silver medal, losing in the finals to Eigil Ramsfjell of Norway 5–4. As defending champions at the 1989 Brier, Team Ryan would not disappoint, capturing their 2nd Canadian championship defeating Rick Folk of British Columbia in a non-eventful 3–2 victory. It was low scoring games like this one, and by teams like Ryan’s dubbed the “Ryan Express” that forced the Canadian Curling Association and World Curling Federation to implement the 3-rock rule, and later the 4-rock rule to force more offense.

At the 1989 Worlds, Ferbey and Team Ryan won their first World Championships, beating Switzerland’s Patrick Hürlimann in the finals. In 1990, Ferbey left the team, and was unsuccessful at attempting to make it to the Brier with his new team of Don Walchuk, Pat McCallum, and Greg Muzechka. Although they did make it to the final four teams at the 1990 Alberta Championships, failing to make the 1990 Labatt Brier in Sault Ste. Marie, Ontario.

The “Ferbey Four” – After playing his last season with Ryan in 1997 where he played in the British Columbia playdowns, Ferbey teamed up with a young David Nedohin in 1997 with Carter Rycroft and Pat McCallum. After a reasonably successful season, reaching the Semi-Finals of the World Curling Tour Championship, and winning the Edmonton Superleague, Ferbey picked up Scott Pfeifer, bumping Rycroft to lead.

In 1999, Rycroft left the team to play with Ferbey’s main rival, Kevin Martin. Rycroft was replaced by Marcel Rocque. The Ferbey Four that would dominate the Brier for the next few years was complete. Ferbey made his return to the Alberta provincials in 1999. While they didn’t win, they did return in 2001 with a bang. They went on to winning not only the Alberta championship, but the 2001 Nokia Brier as well beating Kerry Burtnyk of Manitoba 8–4 in the final.

This sent the team to the 2001 Worlds where they lost both their semi-final game and the bronze medal game, which they gave up to Pål Trulsen of Norway. In 2002, Ferbey won his fourth Brier, the 2002 Nokia Brier, which was his team’s 2nd. They beat John Morris 9–4 in the final. This time, at the 2002 Worlds in Bismarck, North Dakota his team won the championship, beating the same Pål Trulsen, 10–5.

Ferbey and his team would return to the Brier, at the 2003 Nokia Brier in Halifax, Nova Scotia. In the finals, they beat the home-town favourites Mark Dacey 8–4 in the finals. At the 2003 Ford World Curling Championship, his team won their 2nd world title, beating Ralph Stöckli of Switzerland 10–6 in the finals.

The 2004 Nokia Brier was a blip on his team’s record. After returning to the Brier for the fourth straight year, an unprecedented feat especially considering the great number of good teams in Alberta, his team would bow out in the final. After a 10–1 round-robin record, Ferbey and his team lost out to the same team they beat the previous year, Mark Dacey of Nova Scotia, in a 10–9 game where Ferbey’s team surrendered a lead.

However, Team Ferbey did not give up, and their reign would not be over. In 2005, the once again won the Alberta championships, and once again won the 2005 Canadian championships. This set a record, as his team became the first to win 4 championships as a team. The final was against Nova Scotia again, albeit a different team, that of Shawn Adams. In another close game, team Ferbey pulled it out and won 5–4 in the final. His trip to the 2005 Men’s Ford World Curling Championships were marked with struggles, as the team finished the round-robin with three losses – tied for first with five other teams. After having a 4–3 record, Ferbey mounted eight straight wins to win the championship over David Murdoch of Scotland in a convincing 11–4 victory. Additionally, the Ferbey rink was the first team in history to score five on any single end in the world finals – and they managed this feat twice at the 2005 Ford World Curling Championships.