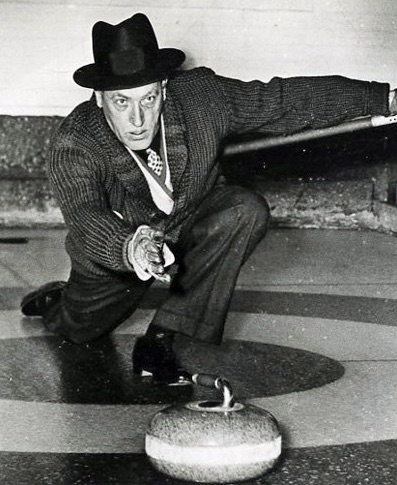 John Kenneth “Ken” Watson was one of Canada’s most talented, innovative and influential curlers. Known as “Mr. Curler,” Watson came to embody the sport of curling in Canada. Not only did Watson curl, for decades he was also an influential promoter and popularizer of the game through his newspaper columns and books. He also played a significant role in the organization and development of junior curling at both the provincial and national levels and helped to found the Scotch Cup in 1959, which grew into the World Men’s Curling Championship.

Watson was born in Minnedosa, Manitoba and later moved to Winnipeg. He began curling at the age of 15 and entered his first Manitoba Bonspiel in 1923, winning his first trophy in 1926 at the age of 21. He led his Strathcona rink to the Manitoba Championships four times, and was the first person to skip his rink to three Brier championships. Watson’s teams were Grand Aggregate Champions in the Manitoba Bonspiel in 1939 as well as the six-year period from 1942-1947. In total, his teams won 32 major bonspiels. During the 1940s Ken Watson was deemed the best curler in the world.

With extraordinary skills and a distinguished competitive record, Watson fundamentally changed the way the sport is played through his development of the long slide. Initially, curlers threw their rocks from a standing crouch position, as there was no foothold (or “hack”) built into the ice to provide sure footing. When the hack was developed, curlers started to take a step or two upon release of the rock, but it was not until a young Watson and his friends removed the grip from their front shoe that the sliding delivery took off. By the early 1930s, Watson and his brother Grant had perfected the slide delivery and were using it in competition. The athletically-demanding “long slide” caused considerable controversy but soon caught on, particularly with the young male curlers who in the 1940s and 1950s had begun to curl in greater numbers.

Not only was Watson a key player in the development of the long slide, but he was able to instruct other young players through his instructional books, most notably, Ken Watson on Curling. It sold over 150,000 copies and covered strategy, sweeping techniques and the psychology of team play, among other subjects. A tireless promoter of the game, Watson founded and organized the first Provincial High School Bonspiel in Manitoba and was instrumental in the organization of a national curling school. Watson died at the age of 81, in Saint-Boniface, Manitoba.