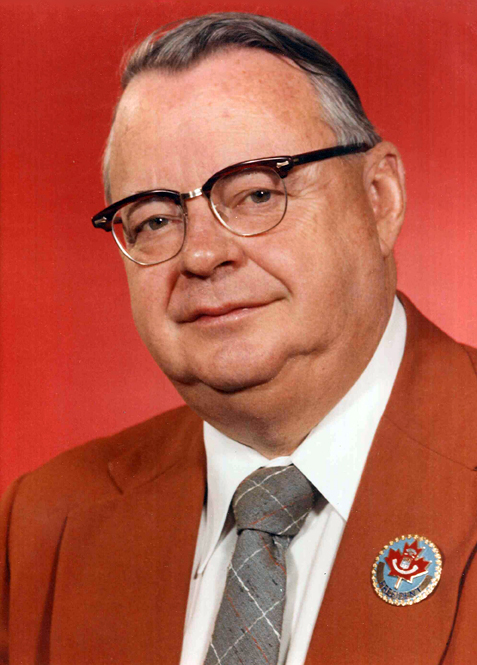 Cecil was born on October 15, 1923, in Winnipeg and was proud to be a lifelong resident of Elmwood, East and North Kildonan. He was educated at Lord Selkirk Collegiate, plus one year at St. John’s Technical High School, graduating in 1939.

As a teenager, he was a member of the 2nd Winnipeg Company of the Boys Brigade. He enlisted in the Canadian Army early in 1943, and was attached to the Royal Canadian Artillery with combat in Italy during the Second World War. He preserved his service medals, the 1939 – 45 Star, the Italy Star, and the Canadian Volunteer Service Medal and Clasp. He was discharged in 1946 with the rank of sergeant.

His working employment included clerical and sales positions at Winnipeg Motor Products, West Chemical Products, and Vita Foam Products of Canada. He served as the accountant-office manager with the North West Commercial Travellers Association, and as the controller of the Highlander Curling Club when it was a 24-sheet facility.

Cec began an association with the Elmwood Curling Club as a junior in 1938, and played in the early editions of the Manitoba Schools (Junior) Bonspiel. After his wartime service, he joined the men’s division at Elmwood and his commitment on and off the ice to the Harbison Avenue club in Winnipeg was unwavering for the rest of his life. Ironically, his key achievement as a curler came when Cec was almost a senior. As a member of Norm Houck’s team, with Al Macatavish and Bob Boughey, the foursome won the renowned Nelson Midsummer Bonspiel in 1971 in British Columbia.

Cec’s administrative talents led to active involvement on the executive committee of the Elmwood Curling Club. He served as the club president in 1957 – 58, and later became one of the club’s Honorary Life Members. At the provincial level, he was elected to the Manitoba Curling Association executive in 1959, and was the MCA president in 1970 – 71. Cec took a particular interest in junior curling. He was a key figure in guiding the operation of the Manitoba Schools (Junior) Bonspiel, and during later years of service with the Canadian Curling Association he was the national junior chairman.

Cec had a prominent role in the direction of the Macdonald Brier in Winnipeg in 1970, the Air Canada Silver Broom in 1978, was chairman of the MCA 100th anniversary committee in 1988, and had additional support positions for the 1991 World Curling Championships, and the 1998 Labatt Brier in Winnipeg.