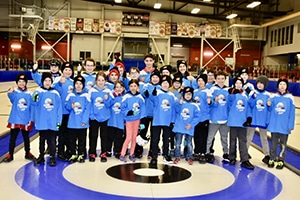 Intro to the program

CurlON launched “Hit Draw Tap” in the 2015-2016 season. It was an instant success – over 450 kids participated in the first year! Hit Draw Tap is modeled after the NFL’s Punt Kick Pass or Master’s Golf – Drive, Chip, Putt. Since then the event has spread across Canada with competitions being held in Manitoba, Alberta, Saskatchewan, Quebec and Northern Ontario.

How to get involved

To get your curling centre involved,
contact your Member Association
by clicking on the button below.

To view the
latest standings across the country,
click on the link below.

Find a curling centre near you

Here’s a map and list of
all curling facilities
across the country.