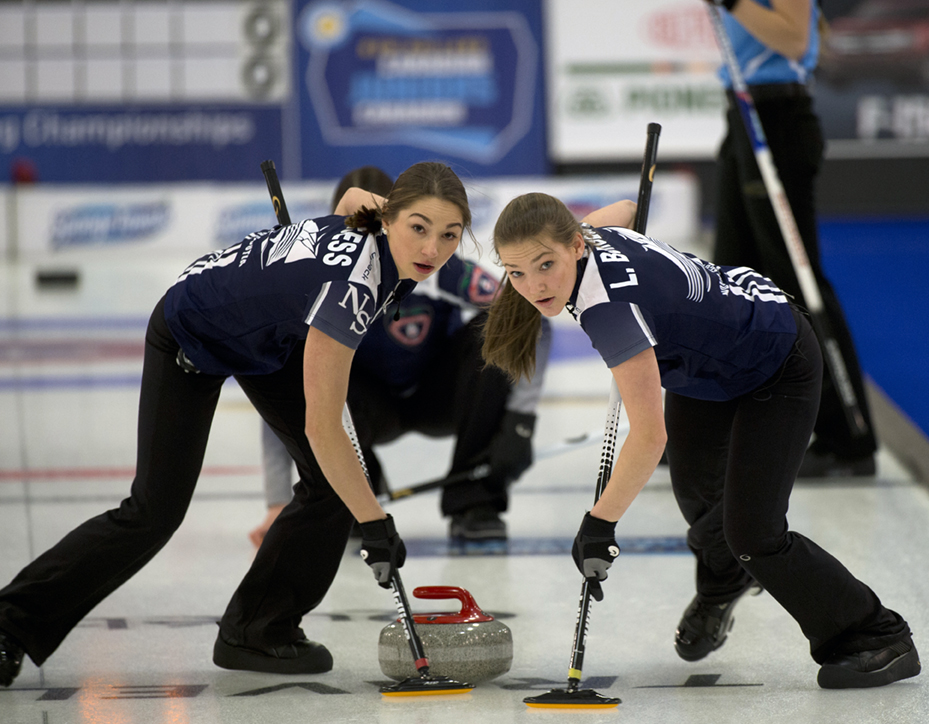 This past 2017-2018 curling season has been an incredible journey—and we couldn’t have done it without the backing of our Nova Scotia-based and Canada-wide curling family.

Our season started with some exciting changes to our team lineup; Kristin Clarke and I asked Kaitlyn Jones to relocate from Saskatchewan to be our skip and we also invited Lindsey Burgess (my cousin) to join our team. While we thought it would take some familiarization time, our new team actually connected extremely well right from the start and we became not only instant teammates but also best friends.

Having added some exceptional talent to a team that already had good depth—with our coach Andrew Atherton, Kristin and myself having captured gold at both the 2016 National and World Junior Championships—we knew we could compete at the highest levels of the game and weren’t shy about setting some lofty goals. We decided to strive for gold at both the 2018 New Holland Canadian Juniors and 2018 World Junior Championships.

As a team we were focused and determined.

Our year consisted of seven cashspiels, which saw us taking home the winning purse at three events. But as a team we really started to hit our stride by the U21 provincials, where we went through the event undefeated.

Our next stop was Shawinigan, Que., for the New Holland Canadian Juniors—taking home gold at this championship would be the first step in our two-part team goal. We jelled so well that whole week, finishing at 12-1, and capturing the gold medal.

Our families and friends rallied around us as we set out for the World Juniors in Aberdeen, Scotland. Unfortunately, traveling to Scotland involved many complications of flight delays and cancellations. In fact, it took us about 50 hours of travel time to get there. Needless to say, that took away any of the much anticipated time that we would have had to tour around Scotland. Even our pre-event practice had to be cancelled due to the delays!

It became a test of our personal and team endurance and mental strength, as we fought off jet-lag from arriving Friday afternoon to play our first game on Saturday morning. We knew this was an all-or-nothing opportunity. So as a team, we accepted the quick turnaround in a drastic time zone change and made every effort to capitalize on each shot in every game.

It all paid off. We finished our week 7-2, beating Sweden for the 2018 World Junior Championship title.

That week at Worlds was beyond incredible. And I was so lucky to have shared those memories with my team and our Curling Canada team leader Helen Radford. Being a part of a double gold for Canada, with the men’s team, under skip Tyler Tardi, also winning their World Championship, made the week even more sensational.

It took a lot of hard work to achieve our team goal.  Being a student athlete is not always easy, especially when battling an intense practice and bonspiel schedule with university. I am fortunate to have friends, family and my curling community, to help me balance the demands of school and competitive curling.

As a former For the Love of Curling scholar, I cannot even begin to tell you what an honour it was to be selected and how much it helped me to have some of my academic and curling expenses covered. Being a competitive curler and a full time student in university is really expensive and my scholarship went a long way in alleviating some of my stresses.

But it’s bigger than only the financial benefits. Knowing that I had the support of the curling community across Canada was tremendous.  I was born into a passionate curling family and had curled since the age of six—yet suddenly I was part of a much larger curling community.

This overwhelming feeling of connection was reinforced throughout our team’s journey this past season. We are so thankful for the support from our little province of Nova Scotia and from everyone across the country that treated us like family and really came together as members of our extended team.

I am so proud to share Canada’s growing and great passion for the sport of curling. As a country we have the highest percentage of curlers in the world, and the competitors whom I have faced at Junior Nationals are all world-class. Curling has certainly helped me to become the person I am today and it has allowed me to support not only my dreams, but others as well, on the road to becoming a Canadian champion.

As a member of the 2018 For the Love of Curling Scholarship selection committee, I will be looking to represent the passion of our national curling community and find new ambassadors for our sport that are embracing what it means to be a Canadian curler!

Karlee Burgess is a….

2018 For the Love of Curling Selection committee member