After losing the final in last week’s Toronto event (only their second loss of in their first 19 games), Team Brad Jacobs is back in action in the World Curling Tour’s Portage la Prairie, Man., stop, the Canad Inns Men’s Classic. 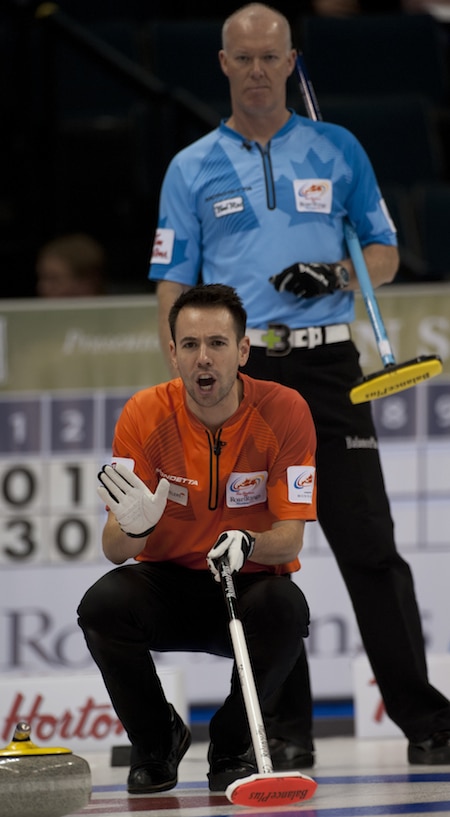 Jacobs, along with Ryan Fry, E.J. Harnden and Ryan Harnden are currently ranked first on the all-important Canadian Team Ranking System (click here for latest standings), in addition to the WCT Order of Merit world rankings (click here for latest standings). While Jacobs tries to keep rolling after his hot start, the competition will be stiff. The field is packed with top-10 teams, including Winnipeg’s Mike McEwen (third on CTRS, second on OoM), Sweden’s Niklas Edin (sixth on the OoM), Edmonton’s Kevin Koe (seventh on both lists), Penetanguishene Ont.’s Glenn Howard (sixth on the CTRS, eighth on the OoM), and Toronto’s John Epping (second on the CTRS, 10th on the OoM). Epping is off to his own hot start, reaching the finals in two WCT events, and the semis in another. The skip who beat Jacobs last week in Toronto, Reid Carruthers, is also in the field. Although his new team is ranked 15th on the OoM, his Toronto win pushed him into fourth place on the CTRS, which is based solely on this season’s results. The strength of the field dictates how many CTRS points are available for each event, and with a roster like this, it’s likely the winner will take home the maximum 40, or close to it. And with the top five CTRS teams being separated by only 35 points, there will likely be some shakeups in the the current order by the time the finals are played on Monday night. The draws in the various women’s events, however, isn’t so top heavy. The only top-10 Canadian team in action is Clearwater, Ont.’s Sherry Middaugh, who is playing in the Stroud Sleeman Cash Spiel, in Stroud, Ont. Middaugh is currently third on the CTRS, behind Winnipeg’s Jennifer Jones and Ottawa’s Rachel Homan. Toronto’s Julie Hastings is also playing in Stroud, hoping to improve on her fifth-place position on the CTRS. Sudbury’s Tracy Horgan, a former Ontario champion, would also like to earn points for the second time this season. Click here for the latest CTRS women’s standings, and click here for the women’s OoM standings. On the other side of the country, Kamloops, B.C., is hosting the Hub International Crown of Curling. Kelowna B.C.’s Kelly Scott is playing her second event of the season, and should be considered one of the favourites. A host of international teams are also participating, including Cissi Östlund (Sweden), Satsuki Fujisawa (Japan), Ayumi Ogasawara (Japan), Un-Chi Gim (Korea), and EunJung Kim (Korea). The Kamloops event also features a men’s event. Notable names in that field include Tim Hortons Brier finalist Jim Cotter (Kelowna) and former World Junior champion Brendan Bottcher (Edmonton). Elsewhere… •    The Medicine Hat Charity Classic hosts 24 men’s teams and 24 women’s teams, competing for a total of $58,000. •    In Winnipeg, the Atkins Curling Supplies Women’s Classic also hosts a 24-team event. •    The Stroud Sleeman Cash Spiel has an 18-team men’s draw, as well. For all of the scores from this weekend’s events, keep checking www.curling.ca