With the European Championships coming to an end on the weekend, there were dozens of points awarded on the World Curling Tour Order of Merit. Champion Binia Feltscher of Switzerland, silver-medallist Anna Sidorova of Russia and bronze-medallist Eve Muirhead of Scotland all earned big points, and moved up further in the Top 10, with Muirhead moving into the No.2 spot, passing Ottawa’s Rachel Homan. 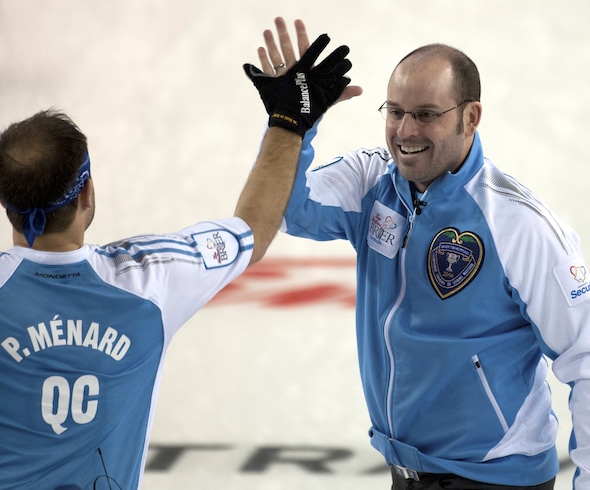 The weekend’s action in Canada, however, was less impactful, especially as it stands on the Canadian Team Ranking System. With many of the top teams taking the weekend off, there weren’t a lot of opportunities to cash in a big win; not on this continent anyway. That being said, there were events, and they did impact the standings. Edmonton’s Chelsea Carey, along with Laura Crocker, Taylor McDonald and Jen Gates, won the Boundary Ford Curling Classic in Lloydminster, Alta. They took home $7,000 but perhaps more importantly, 7.5 CTRS points, which moves them within striking distance of the next few teams on the CTRS women’s standings. Less than 10 points separate seventh place from 10th, where Carey currently sits. The news was similar on the men’s side. Saskatoon’s Steve Laycock won the Weatherford Curling Classic in Estevan, Sask. for a payday of $10,000 and nine CTRS points, which moves him up two spots to No. 7. Laycock (with Kirk Muyres, Colton Flasch and Dallan Muyres) is now breathing down the neck of Penetanguishene, Ont.’s Glenn Howard, who is just two points ahead. In Clermont, Que., at the Challenge Casino de Charlevoix, Jean-Michel Ménard (Gatineau, Que.) beat Kingston, Ont.’s Don Bowser in the final, 5-2. Menard and his team (Martin Crête, Éric Sylvain, Phillipe Ménard) earned $12,000, while Bowser took home $7,000. Bowser, however, still has bragging rights as he currently sits two places higher than Ménard on the CTRS, and just out of the Top 10. Ménard earned 8.35 points for his win, while Bowser’s runner-up finish gained him 5.845. With the 2014 Home Hardware Canada Cup of Curling, presented by Meridian Manufacturing, starting Wednesday in Camrose, Alta., it will be the Canadians’ chance to make up some big points, while the Europeans (and the rest of the world) have to watch. With seven of the top men’s teams, and seven of the top women’s teams fighting for a share of $140,000, there will be maximum points up for grabs, meaning the leaderboards could look very different by Monday morning. Action starts Wednesday morning, with great matchups right out of the gate. Homan, will face Coldwater, Ont.’s Sherry Middaugh. Howard, meanwhile, will face Kevin Koe of Calgary. For all the scores and headlines, keep an eye on curling.ca all weekend.