Team Canada in the hunt after two wins at Wheelchair Worlds

Canada is gaining momentum after winning both games on Tuesday at the 2015 World Wheelchair Curling Championship in Lohja, Finland. 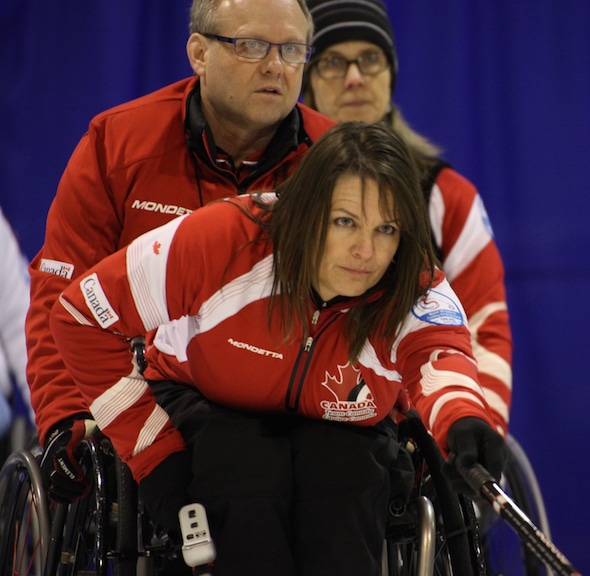 The back-to-back victories are a welcome change for skip Mark Ideson of London, Ont. (throwing lead rocks), vice-skip Ina Forrest (Armstrong, B.C.; throwing fourth stones), third Dennis Thiessen (Sanford, Man.), second Sonja Gaudet (Vernon, B.C.), alternate Marie Wright (Moose Jaw, Sask.), and coach Joe Rea (Prince George, B.C.). The group has faced challenges that vary from playing in an adjusted lineup, to swingy ice at the Kisakallio Sports Institute this week. Canada started the morning draw with a 6-4 victory over Aileen Neilson’s team from Scotland. Neilson is the only female skip among the 10 teams at the championship. Scotland earned the bronze medal as Great Britain at the 2014 Paralympic Winter Games. Ideson said Canada played into Scotland’s hitting game for the first four ends. It resulted in Canada scoring a single in the first and fourth, while Scotland scored two in the second and stole one in the third for a 3-2 lead at the fourth-end break. Canada shifted its game plan and focused on getting some rocks behind cover, which proved to be effective. The Canadians stole one point in both the fifth and sixth ends. Scotland tied the game 4-4 with a single in the seventh. Canada had the coveted hammer in the last end and put it to good use, scoring a deuce in the eighth and earning the victory. If Canada felt good after beating Scotland, they must have been feeling great after besting Norway’s Rune Lorentsen 9-2 in the afternoon draw. Norway scored one with the hammer in the first end and stole another point in the second. However, Canada replied with a single in the third and a stolen point in the fourth. Ideson and crew cracked open the game in the second half. Canada stole three in the fifth, one in the sixth, and another three in the seventh. Norwary conceded the game at that point. “There were definitely a few tactical errors on my part today, but I think we capitalized on a few of their mistakes,” Ideson said, following the game against Norway. “We certainly had a few mistakes of our own but luckily we came out of it OK and were able to take advantage of the situations that presented themselves.” Canada has a winning record (4-3) for the first time at the championship. It will continue its path to the playoffs on Wednesday during the last day of round-robin competition. “We certainly feel like we’re building momentum, we feel more comfortable on the ice. It’s good ice, it’s challenging ice and we’re starting to feel more comfortable out there. We’re gelling as a team and we feel good but we’re still going to take it one rock at a time,” Ideson said. Canada will first play Slovakia’s Radoslav Duris at 9:30 a.m. Lohja time (2:30 a.m. EST). After that, it will be a rematch of the 2014 Paralympic gold medal final when Canada plays the undefeated Russian team, skipped by Andrey Smirnov at 3:30 p.m. Lohja time (8:30 a.m. EST). Live scoring, standings, and the live stream from the 2015 World Wheelchair Curling Championship can be found at: https://wwhcc2015.curlingevents.com/. This story will be posted in French as soon as possible at https://www.curling.ca/?lang=fr/