Brad Jacobs and his Northern Ontario Olympic champions continued to roll along at the Tim Hortons Brier, presented by SecurTek Monitoring Solutions, posting two victories Monday to stand alone atop the standings at 5-0, the only unbeaten team. 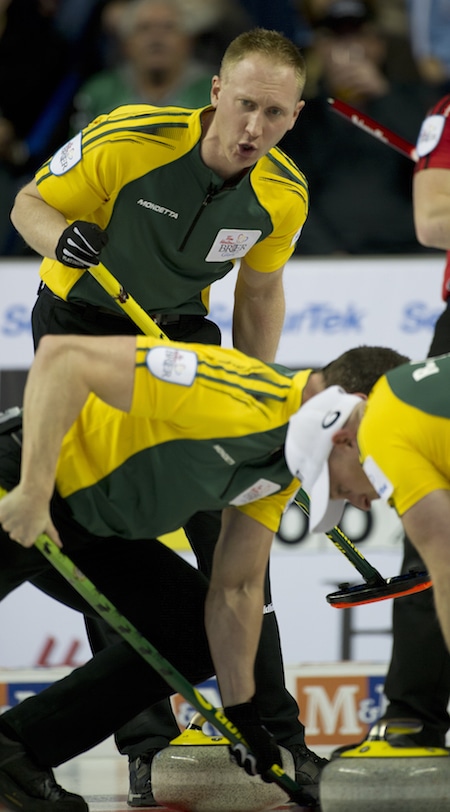 Jacobs, third Ryan Fry, second E.J. Harnden, lead Ryan Harnden, alternate Eric Harnden and coach Tom Coulterman of Sault Ste. Marie continued to be a scoring machine, scoring three in the third end and rolling to a 7-3 win over Mark Kean of Ontario (Fenelon Falls). “Should have been four,” Jacobs said of the third end. “Wide open hit for four and I should have gone with my gut, I really wanted to throw just peel, middle of the rock. But because we had a yellow beside it I didn’t want it to even be a factor. We took in-between weight and in-between ice and I rolled out. But we got it back with steal in the next end. So I really like the way the guys played tonight.” Meanwhile John Morris and Team Canada (Calgary) failed to gain any momentum from their afternoon victory, falling 8-4 to Steve Laycock of Saskatchewan (Saskatoon), Alberta’s Kevin Koe continued to show improvement with a 7-5 win over Jean-Michel Ménard of Quebec and Reid Carruthers of Manitoba (Winnipeg) handed Brad Gushue of Newfoundland-Labrador (St. John’s) is second loss of the day, 8-5. 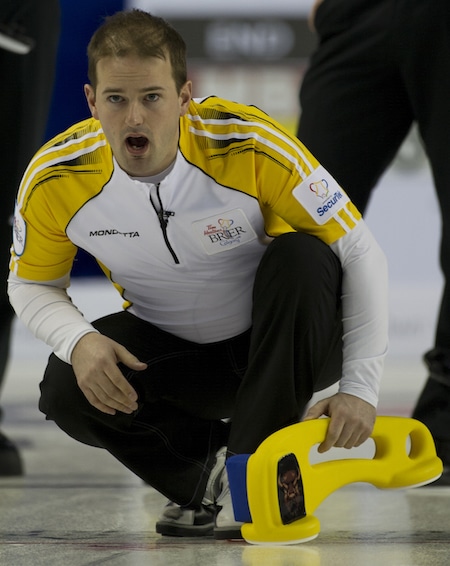 The results leave Saskatchewan alone in second at 3-1 followed by Newfoundland-Labrador at 3-2, Manitoba, Alberta, B.C., Ontario and P.E.I. bunched at 2-2, Quebec and Team Canada at 2-3, New Brunswick at 1-3 and Northwest Territories 0-4. The loss by Morris was a shocker. The veteran skip flashed both his rocks in the first end, giving Laycock an easy three and Morris missed again with last rock in the fourth, allowing Saskatchewan to score three again for a 7-0 lead. “My first one picked, hit some debris,” Morris said. “It was an open hit. You make those 10 times out of 10. Then I had to play a much more difficult, third of a rock double and on this ice if you’re a hair outside it won’t forgive you.” The loss puts Team Canada from a precarious position after just three days. As second Carter Rycroft put it: “We might be hanging from the edge of the cliff if we keep playing like this.” TSN/RDS2, the official broadcast partner of Curling Canada’s Season of Champions, will provide complete coverage of the Tim Hortons Brier, leading to the gold-medal game on March 8 at 5 p.m. The winner of the 2015 Tim Hortons Brier will represent Canada at the Ford World Men’s Championship, March 28-April 5 in Halifax, in addition to qualifying for the 2015 Home Hardware Canada Cup in Grande Prairie, Alta., the 2016 World Financial Group Continental Cup in Las Vegas and the 2016 Tim Hortons Brier in Ottawa For ticket information, go to www.curling.ca/2015brier-en/tickets/ This story will be posted in French as soon as available at https://www.curling.ca/2015brier-fr/