TALLINN, ESTONIA – It was a big day at the Tondiraba Ice Hall for the Canadian teams, as they both won their respective matches to clinch a berth in the 1-2 Page playoff games at the 2015 World Junior Curling Championships. 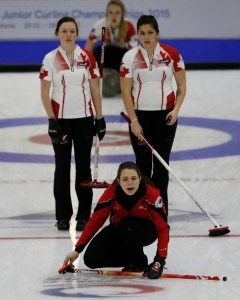 Edmonton’s Kelsey Rocque, along with teammates Danielle Schmiemann, Holly Jamieson, Jessica Iles, alternate Kristen Streifel and coach Amanda-Dawn Coderre maintained their unblemished 8-0 record with a 4-3 win over Switzerland in their second last round robin game. Though the team had already qualified, there was a ton of pressure on the women, as a win would put them into the 1-2 Page playoff where the winner of that game will go directly to the world finals. With that opportunity riding on the line, the players kept it simple in the first three ends with straightforward target practice resulting in three blanks in a row. In the fourth end, Switzerland forced Canada to hit for a single point to open the scoring. The fifth end saw Canada turn up the dial on the pressure on Switzerland with a pile of Canadian rocks in the house. Canada picked up a steal of one after the Swiss skip rolled out on a hit. Switzerland answered back with a single in the sixth to bring the score to 2-1. In the eighth end, Canada attempted to throw a blank, but ended up settling for a point. Though it wasn’t the original game plan, that two point lead after eight put the women in a solid position to force Switzerland to go hard for a deuce in the ninth. End nine saw Switzerland play a tough low-weight double on its last to pick up two points and tie the game at 3-3. Despite two beautiful tick shots by Iles, the 10th end got messy for Canada with many rocks blocking the path to the button. Luckily for the Canadians, the Swiss skip’s last rock went deep into the back 12-foot leaving the door open for Rocque to draw to the eight-foot for the win – and she did! “As a skip, you want a draw to the pin for your last shot in the last end. I just wanted to make sure I at least had a path to the four-foot,” said Rocque. “The guard was a little off-centre and we got a little lucky with Switzerland slipping deep.” The Winnipeg-based men’s team, Braden Calvert, Kyle Kurz, Lucas Van Den Bosch, Brendan Wilson, alternate Colton Lott and coach Tom Clasper, picked up two hard-fought victories to ensure their spot in the 1-2 Page game with a 5-3 win over Switzerland and a 6-5 win over South Korea. Canada had a rough start to the game against Switzerland with a few uncharacteristic misses that resulted in two points for Switzerland in the first end. Canada opted to blank the next three ends when opportunities for a deuce never materialized. In the fifth end, Canada took a more aggressive approach that paid off for two points. A hogline violation on Switzerland’s last rock of the sixth end gave Canada a steal of one to jump ahead 3-2. After a blanked seventh end, Canada dominated the eighth, forcing the Swiss to draw to the four-foot against three Canadian counters. The crowd was thoroughly entertained in the ninth end when Calvert used his hitting strength to make a big weight run double to pick up two big points. In the 10th, the Canadians ran the Swiss out of rocks for a 5-3 final score. “To clinch the 1-2 game was our goal coming into this competition,” said Calvert. “We got off to a shaky start in the first end [against Switzerland] and had to claw our way back all game. Patience really paid off for us.” Canada’s second game of the day was one of their most challenging of the competition with incredible shot-making by both teams to keep the game close and the fans on the edge of their seats. 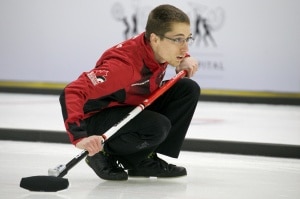 The Canadians got off to a much stronger start this time around with a single in the first and a steal of one in the third end. After a blank in the fourth, the Koreans went hard for a deuce in end five. A split early in the end set their team up perfectly and South Korea tied the game at 2-2. The sixth end saw the South Korean skip flash both Canadian rocks on a double attempt, leaving Canada with a draw for three to extend its lead to 5-2. South Korea picked up another point in the seventh end with a draw to the four-foot against a couple Canadian stones. The eighth end came down to a measure in favour of Canada for the single point. A series of peels by the Canadians, including a run double peel by third Kurz to open the front of the house up, resulted Korea being forced to a single point. Needing a steal of two to tie and send the game to an extra, Korea came up just short, as the Canadians ran them out of rocks for a final score of 6-5. “It was nerve-wracking out there,” said Calvert. “It’s the kind of game you want to play going into playoffs. I think it will set us up well for the playoffs since there will be quite a bit of pressure on us.” The Canadian women will take on South Korea Friday at 9 a.m. local (2 a.m. ET). The men have a rematch of Thursday morning’s game when they face off against Switzerland in the 1v2 Page playoff game at 7 p.m. local (noon ET). The World Junior Curling Championships will be broadcast on the World Curling Federation’s YouTube channel at www.youtube.com/WorldCurlingTV The Canadian men’s 1v2 Page playoff game will be the featured game at 7 p.m. local (noon ET). For the full game and broadcast schedule information, go to: https://wjcc2015.curlingevents.com/schedule For even more of an insider look, Streifel, women’s team alternate, will be keeping a blog of the team’s adventures in Tallinn. Read all about it here: https://k-streif.blogspot.ca This story will be posted as soon as possible at https://www.curling.ca/?lang=fr