It was a morning of the heavyweights at the Tim Hortons Brier, presented by SecurTek Monitoring Solutions, with Newfoundland-Labrador and Team Canada emerging the big winners.

Brad Gushue of Newfoundland-Labrador (St. John’s) scored key singles early and then counted one in the 10th to knock off previously unbeaten Brad Jacobs of Northern Ontario (Sault Ste. Marie) 6-5 while Team Canada won its fifth straight game under Pat Simmons, 7-5 over Jean-Michel Menard of Quebec (St-Romuald). In the two other games, Adam Casey of Prince Edward Island (Charlottetown) beat Jeremy Mallais of New Brunswick (Saint John) 8-4 and Jim Cotter of B.C. (Vernon) beat Jamie Koe of Northwest Territories (Yellowknife) 6-2. The results left Northern Ontario at 9-1 followed by Newfoundland-Labrador at 8-2, Canada at 7-3, Saskatchewan at 5-3, Quebec 6-4, Manitoba and Alberta at 4-4, B.C. at 4-5, P.E.I. at 3-6, Ontario at 2-6, New Brunswick at 2-7 and the Territories 0-9. Gushue scored one in the second, got a steal in the third when Jacobs uncharacteristically flashed with his first stone but then made a solid runback double to reduce Newfoundland-Labrador’s steal from three to a single. Gushue, with third Mark Nichols, second Brett Gallant, lead Geoff Walker and coach Ken Bagnell, stole another single in the fourth for a 3-0 lead when Jacobs flashed on a blank attempt. After the teams traded singles, Jacobs jumped on two half misses by Gushue to score three and tie the game 5-5. From there it was a tight battle until the final stone between the two teams who will meet again Friday evening in the Page playoff 1-2 game. “Anytime you play those guys it’s tough,” said Gushue, who is trying to win his first Tim Hortons Brier in his 12 appearance. “We’ve had a lot of good battles over the years. It’s probably 50-50 who wins but it’s always tight. “I had one eye on the Quebec-Canada game because I knew if we won and Canada won we were in (Page 1-2). When Canada got the lead I was like, oh, we better keep our lead so it was nice to pull that one off.” Jacobs and his Olympic championship team of third Ryan Fry, second E. J. Harnden, lead Ryan Harnden, alternate Eric Harnden and coach Tom Coulterman, struggled early but found their game in the second half. 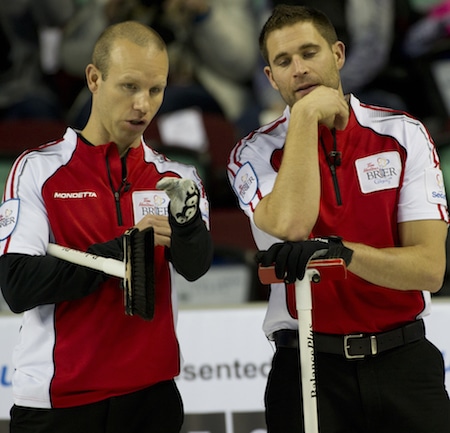 “I’m happy with how we battled back in the second half because we played like complete garbage in the first half, especially me,” said Jacobs. “There’s no real reason for it. It’s going to happen from time to time. To try to go through the Brier undefeated is pretty difficult. “We need to pick it up, but we know which game really matters at this point.” In a game that put them in position to clinch a playoff spot tonight, Team Canada scored three deuces en route to a fairly decisive win over Quebec, a team that won four straight games. “It felt pretty good out there. We got a little bit of control early and played pretty well for the most part,” said Simmons, who took over skipping Team Canada from John Morris on Tuesday when the team was 2-3 but has gained momentum ever since. “It counts for something, no doubt about it,” said Simmons, who made a key freeze with his final stone in the 10th end that left Quebec little chance to get the deuce it needed to tie. “Momentum’s a good thing in the sense that it’s hard, when it’s going well, to get rid of it and when it’s not going well to get it back. That’s why I’m so proud of the boys, because we did something that’s pretty tough to do this week, when we were struggling. “But you can lose it in a heartbeat so we have to stay focused.” Canada plays Northern Ontario this evening with the chance to clinch a playoff spot with a win. TSN/RDS2, the official broadcast partner of Curling Canada’s Season of Champions, will provide complete coverage of the Tim Hortons Brier, leading to the gold-medal game on March 8 at 5 p.m. The winner of the 2015 Tim Hortons Brier will represent Canada at the Ford World Men’s Championship, March 28-April 5 in Halifax, in addition to qualifying for the 2015 Home Hardware Canada Cup in Grande Prairie, Alta., the 2016 World Financial Group Continental Cup in Las Vegas and the 2016 Tim Hortons Brier in Ottawa For ticket information, go to www.curling.ca/2015brier-en/tickets/ This story will be posted in French as soon as available at https://www.curling.ca/2015brier-fr/