Gold for Alberta’s Park and Thomas at Mixed Doubles

They had to settle for silver last year, but this year it’s all gold for Alberta’s Kalynn Park and Charley Thomas, who are the 2015 Mixed Doubles champions after defeating Ontario’s Bowie Abbis-Mills and Tess Bobbie in the final on Sunday evening at the Ottawa Hunt & Golf Club. 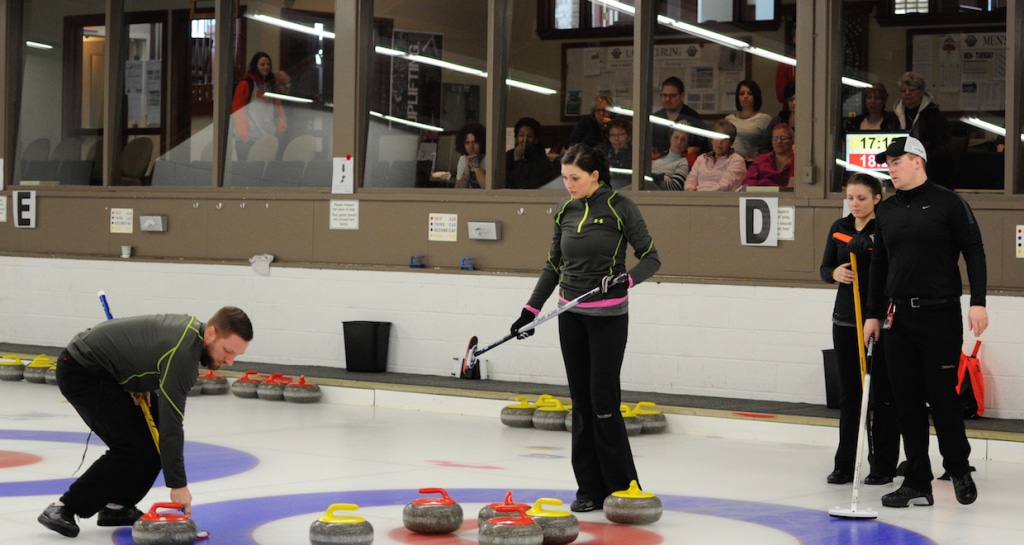 Charley Thomas sweeps a rock into the rings, watched by teammate Kalynn Park and opponents Bowie Abbis-Mills and Tess Bobbie during the final of the 2015 Mixed Doubles Curling Trials at the Ottawa Hunt & Golf Club (Claudette Bockstael photo)

Last year’s finalists from Alberta took a commanding lead over Ontario’s Bowie Abbis-Mills and Tess Bobbie early on to win with a final score of 8-3. After finishing with a record of 6-1 in round robin play, the duo went on to beat Clancy Grandy and Patrick Janssen in the quarter-finals, and Lynn Kreviazuk and David Mathers in the semifinal earlier in the day. With the win, Park and Thomas have earned a trip to Sochi, Russia, to compete at the 2015 World Mixed Doubles Championship, April 18-25, in the same Ice Cube Curling Center that hosted the 2014 Winter Olympic and Paralympic curling competitions. “Anytime you have a chance to represent Canada on the world stage there is an immense sense of pride,” said Thomas after the game. “We just hope we can play our best and bring home a medal.” Abbis-Mills and Bobbie, who were the only team to go through the round robin, quarter- and semifinals undefeated, take home the silver. Kreviazuk and Mathers will share bronze medals with Hugh and Janet Murphy. (With notes from Kelly MacNaull, Ottawa Hunt & Golf Club)