Pat Simmons of Canada and Thomas Ulsrud of Norway led their teams to victory in Tuesday afternoon’s Draw No. 10 to set up their head-to-head clash tonight at the 2015 Ford World Men’s Curling Championship at the Scotiabank Centre in Halifax.

Simmons, third John Morris, second Carter Rycroft, lead Nolan Thiessen, alternate Tom Sallows and coaches Earle Morris and Rick Lang, won a tight battle with a stubborn Yusuke Morozumi of Japan 7-4. Ulsrud, third Torger Nergård, second Christoffer Svae, lead Håvard Vad Petersson, alternate Markus Sneve Heiberg and coach Pål Trulsen had a slightly easier time, rolling off three deuces through seven ends and coasting to an 8-7 win over Aku Kauste of Finland. That left Canada unbeaten at 6-0 and Norway right behind at 5-1. “Slowly it’s getting there but I don’t think it’s going to be enough for tonight’s game against Canada, but hey we managed to win another close one,” said Ulsrud. “I’m really looking forward to the game tonight, it’s always good playing Canada. That’s why I play curling, to play good teams from Canada in the worlds and this is going to be a good one.” Simmons regards tonight’s game as just one more tough match against a tough opponent, even though Norway is the reigning world champion. “They’re all big, everyone can beat everyone here and tonight is no different,” he said after Canada scored three in the fourth and got a big steal of one in eight to get past Japan. “The steal ended up being huge because it was either going to be a steal or two or three back the other way.” Simmons said the game may have been his team’s most complete of the event and coach Earle Morris agreed. “They’re building momentum and the last two or three games to me were really good,” said Morris. “The sign of a good team is when you’re playing a team that’s playing really well against you that you play better and that’s what I saw. I said, you know what, this team is really good, they’re giving us a really good game and we’re refusing to give them anything” Canada got the upper hand with a three-point fourth end when Simmons drew to third shot in a tightly bunched four foot. The teams had traded singles the first three ends, Japan leading 2-1 after that. Japan got two back in the fifth for a 4-4 tie. Simmons blanked the sixth and got his chance for two in the seventh when second Kosuke Morozumi’s shooter rolled out on a takeout. That let Canada split the house and Simmons eventually had a straight forward hit and stick for the pair and a 6-4 margin. Simmons and crew got a huge steal in eight when Yusuke Morozumi came up light with a difficult draw attempt with last rock, giving Canada a 7-4 margin. 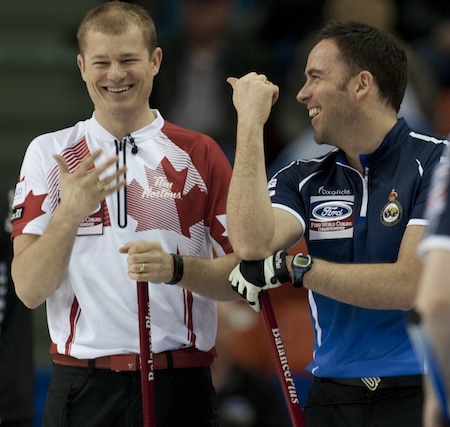 In the other games, Jialing Zang of China cracked a five-ender in the sixth end to break open a tight game and go on to beat Jiří Snítil of the Czech Republic 8-7, leaving both teams with four losses, and Ewan MacDonald of Scotland won his second straight, 6-4 over John Shuster of the U.S. Marc Pfister of Switzerland (5-1), Niklas Edin of Sweden (3-3) Joel Retornaz of Italy (2-4), and Evgeny Arkhipov of Russia (1-5), had the afternoon byes. The 2015 Ford Worlds continue on Tuesday with the evening draw at 7:30 p.m. AT. All Canadian games and the playoff rounds for the 2015 Ford World Men’s Curling Championship will be televised on TSN/RDS2, the official broadcasting partner of the Season of Champions. The full broadcast schedule is available at https://www.tsn.ca/2014-15-tsn-curling-broadcast-schedule-1.95515. Live scoring is available at: https://www.curling.ca/scoreboard/#/competitions/1670-2015-ford-world-men-s-curling-championship/scoreboard To purchase tickets to the 2015 Ford World Men’s Curling Championship, go to: https://www.curling.ca/2015worldmen-en/tickets/