Canada opens with a win at World Mixed Championship

Max Kirkpatrick and his team from Swift Current, Sask., kicked off the 2015 World Mixed Curling Championship with a 6-4 win over Finland on Saturday morning, the first day of competition in Berne, Switzerland. 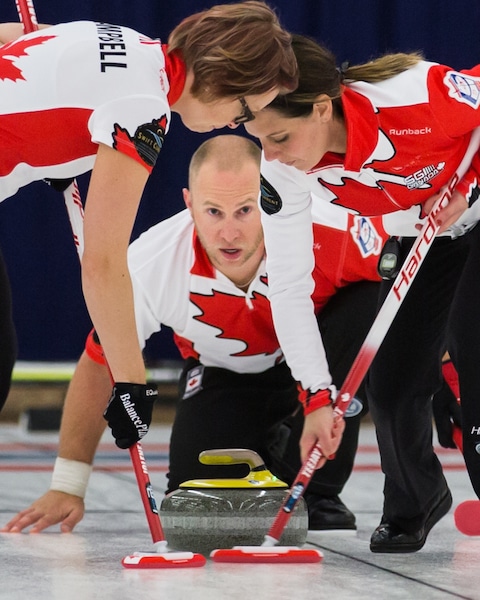 Trailing 3-1 at the break, Kirkpatrick, backed by third Jolene Campbell, second Chris Haichert and lead Teejay Haichert, with coach Ron Meyers, broke the game open with a score of four in the fifth end. Finland, skipped by Tomi Rantamaki, managed a single in the sixth, but Canada scored another single in the seventh and kept the Finns off the scoreboard in eight to secure the win. “That wasn’t our best performance,” said Kirkpatrick after the game. “I think, like a lot of the teams, the ice is pretty new this time of year. We haven’t had a lot of ice, so hopefully we can get stronger. We have to, because that was a good team we played and we have to (get stronger) to keep winning. Hopefully we can keep it going.” Canada’s next game is against Israel’s Elana Sone on Sun., Sept. 13, 2 p.m. (ET). Swiss Sport TV (https://www.swiss-sport.tv/) will broadcast the playoffs as well as some games from the round robin, including Canada versus Norway on Thurs. Sept. 17 at 12 p.m. (ET). This is the first time a world championship has been staged in the traditional mixed (two male, two female players) format. It replaces the European Mixed Championship that had been played for the past few seasons. A total of 36 teams, split into four pools of nine, will contest the world championship. The teams will play a round robin within their pool, with the top three teams from each pool reaching the playoffs, which begin Friday, Sept. 18. The pool winners will be seeded directly into the quarter-finals, while the second- and third-place teams will play crossover playoff games. The semifinals, along with the gold- and bronze-medal games, are scheduled for Saturday, Sept. 19. Results, statistics, news and photos from the World Mixed Curling Championship 2015 can be seen here on the WCF’s official event website: https://worldcurling.org/wmxcc2015.