This time last year, Mike McEwen (Winnipeg) was running away with the lead on the Canadian Team Ranking System leaderboard, winning all but one of his first seven events. The one he didn’t win was won by Brad Gushue (St. John’s), who is starting this season like McEwen did last year. 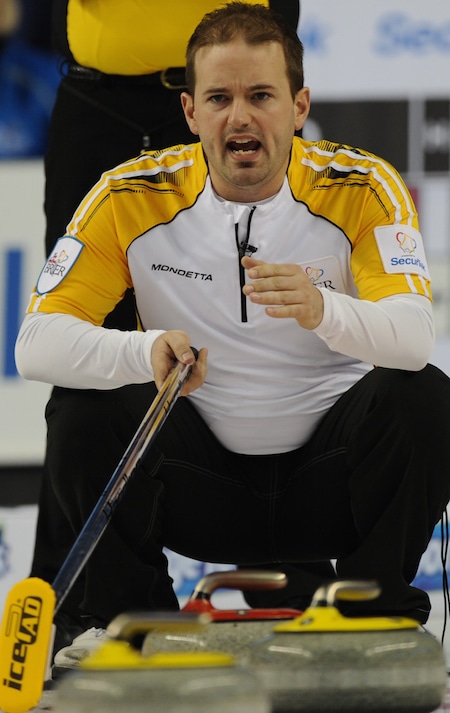 Reid Carruthers will be looking for back-to-back titles at the Stu Sells Toronto Tankard this weekend. (Photo, Curling Canada/Michael Burns)

Gushue has won three of his first four events, including last week’s Swiss Cup in Basel, Switzerland. He’s ranked No. 1 on the CTRS, and McEwen currently sits in third. Both teams will be playing this weekend at the Stu Sells Toronto Tankard at the High Park Curling Club. Also in the mix are No. 2 Reid Carruthers of Winnipeg and No. 4 Brad Jacobs of Sault Ste. Marie, Ont. When you include Sweden’s Niklas Edin, the top five teams on the World Curling Tour Order of Merit will all be battling for a share of $53,000 and a pile of points. Carruthers won the event last year, beating Jacobs in the final. The 29-team field also includes John Epping (Toronto) Adam Casey (Summerside, P.E.I),  and Glenn Howard (Penetanguishene, Ont.), all of whom are trying to find some traction in this CTRS race. All three haven’t seen the results they’d like this year, and the Stu Sells is a chance to get back on track. Howard won the event in 2013, and lost a semifinal in 2014; results he’d like to duplicate this weekend. While the men are slugging it out in Toronto, the women will be facing off in Calgary at the Curler’s Corner Autumn Gold Curling Classic. Like the men, the women will also be battling through a stacked field featuring CTRS No. 1 Rachel Homan (Ottawa), No. 2 Kerri Einarson (Winnipeg), No. 4 Stefanie Lawton (Saskatoon), No. 5 Chelsea Carey (Calgary) and No. 7 Val Sweeting (Edmonton). And while it it unusual to see her so far down the list, CTRS No. 8 Jennifer Jones of Winnipeg will look to make a splash in Calgary. A solid result could lift her back up the list — potentially as high as second place behind Homan. Jones has been playing with some spares in the lead position, as Dawn McEwen is caring for a new baby. 2012 Scotties champ Heather Nedohin of Edmonton will fill in for the Calgary event. As the defending champ of this event, they’d like to cash in and return to the form curling fans are used to seeing. The 32 teams are playing for a purse of $50,000. Far across the pond, most of the major European women’s teams are playing in Baden, Switzerland. Sherry Middaugh (Coldwater, Ont.) and her team were the only Canadians who made the trip overseas.