Morris, Man., is a curling hotbed this weekend!

According to Wikipedia, the town of Morris, Man., boasts a population of 1,797 people. This weekend, however, that will swell to well over 2,000 while 64 teams come into town  to compete in the annual DEKALB Superspiel at the Morris Curling Club and the Rosenort Arena. 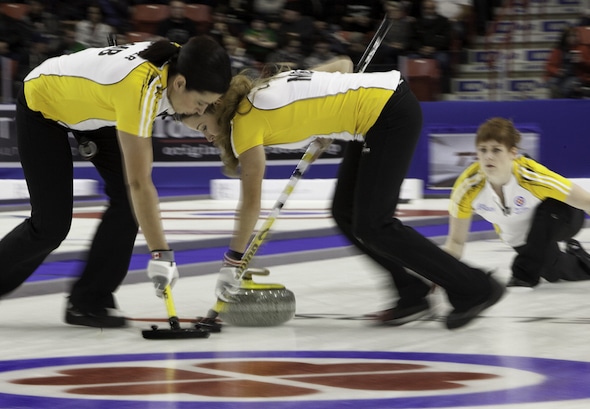 With the men’s and women’s field each boasting 32 teams, the total prize pool of $95,000 will be split between a total of 16 teams (8 men’s, 8 women’s) who reach the playoffs, following a triple-knockout qualifying process.

Morris is only a short, one-hour drive from Winnipeg, so a lot of Manitoban talent made the trip, most notably World Curling Tour Order of Merit No. 1 Mike McEwen and reigning Scotties Tournament of Hearts champion Jennifer Jones.

Both McEwen and Jones are looking to improve on their place on the Canadian Team Ranking System. McEwen failed to qualify in last week’s Grand Slam of Curling event, while the three teams above him in the rankings (Kevin Koe of Calgary, Reid Carruthers  of Winnipeg and Brad Gushue of St. John’s) all gained major points for a playoff appearance.

The Jones team, on the other hand, has qualified in its last three events, but hasn’t won any so far this year. And while the field lacks their biggest competition in recent years (Rachel Homan of Ottawa and Val Sweeting of Edmonton), this may be an opportunity for them to return to championship form.

That’s not to say that it will be a walk in the park for either squad. Jones will have to contend with four Top-10 CTRS teams in Kerri Einarson (Winnipeg), Chelsea Carey (Calgary), Kristy McDonald (Winnipeg), and Alli Flaxey (Caledon, Ont.).