Skip to Equip: Sioux Lookout curlers bring health and wellness to their community

If your New Year’s resolution this year includes doing good deeds, consider following in the steps of the Ladies’ section at the Sioux Lookout Curling Club. They found a way to not only attract curlers to their Skip to Equip bonspiel, but they also raised a whopping $76,000 for the local hospital foundation at the same time. 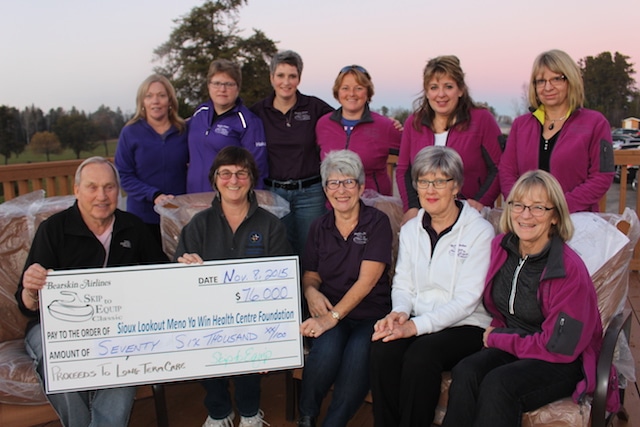 The organizing committee of the Skip to Win bonspiel presents a cheque for $76,000 to the Sioux Lookout Meno Ya Win Health Centre Foundation (Photo courtesy of Muriel Anderson)

Sioux Lookout curler Muriel Anderson had noticed that participation in Ladies’ bonspiels at her club was starting to drop off, so she started looking for ways to get more curlers on the ice. Her experience with the Bearskin Airlines Hope Classic in Thunder Bay got her thinking: what if our bonspiel was about more than just curling? Would “a bonspiel with a purpose” increase interest? The answer was a resounding “Yes!” “I had participated in the Bearskin Airlines Hope Classic in Thunder Bay with various players for about 10 years and saw how successful it was,” says Anderson. “At one time they had considered having a satellite bonspiel associated with them. That committee provided us with a lot of information and they were willing to mentor us.” First, she contacted a curling colleague who operates a tourist business to see about approaching the Sioux Lookout Meno Ya Win Health Centre (SLMHC) Foundation to partner with a charity spiel. A small contingent made their pitch and impressed the Foundation with their ideas, securing a connection with an organization that would not only benefit from the bonspiel’s fundraising, but who could also issue tax receipts for pledges. Next step: a sponsor. “We approached Harvey Friesen, President of Bearskin Airlines at the time and he was quick to take up the lead,” Anderson says. “We asked for volunteers at our regular league curling night and the committee was formed with that one request.” After that, the Skip to Equip committee was on a roll. They chose an early-November date – avoiding conflicts with other events such as hockey tournaments and other curling competitions – designed a logo for promotion and to use on customized clothing, and got to work on attracting curlers and creating fundraising opportunities. 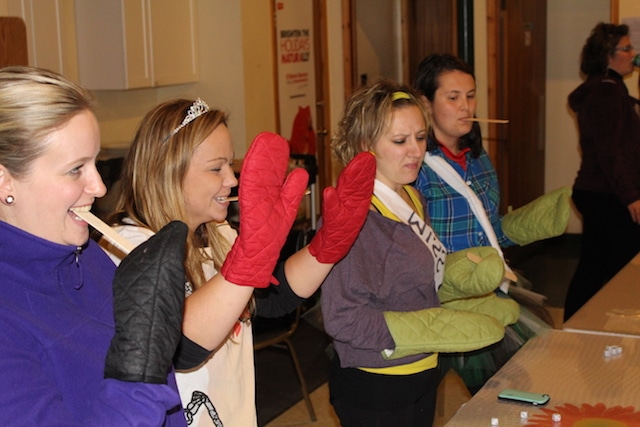 “This year we agreed to a mission statement – ‘To create a fun atmosphere in which to host a ladies Charity Bonspiel where participants are encouraged to let loose…what happens at the club, stays at the club,’” says Anderson. At the Skip to Equip bonspiel, fun and giving go hand-in-hand. There’s a silent auction, a penny auction, as well as a raffle for some spectacular prizes donated by sponsors. This past November, some of the big prizes included $2500 cash, a fly-in fishing trip for four people for three days and three nights, a round trip for four (thanks to sponsor Bearskin Airlines) with four tickets to a Winnipeg Jets game. Participants also receive welcome bags of donated items, given to each curler who submits a pledge sheet, and complimentary appetizers after the opening game and a sponsored lunch on Saturday. “Once ladies have participated (in our bonspiel), it seems that they are hooked,” Anderson says about the 24 teams who participated in this year’s Skip to Equip. “We advertise it as a fun-filled, no-experience-needed event and offer curling delivery instruction prior to the event.” 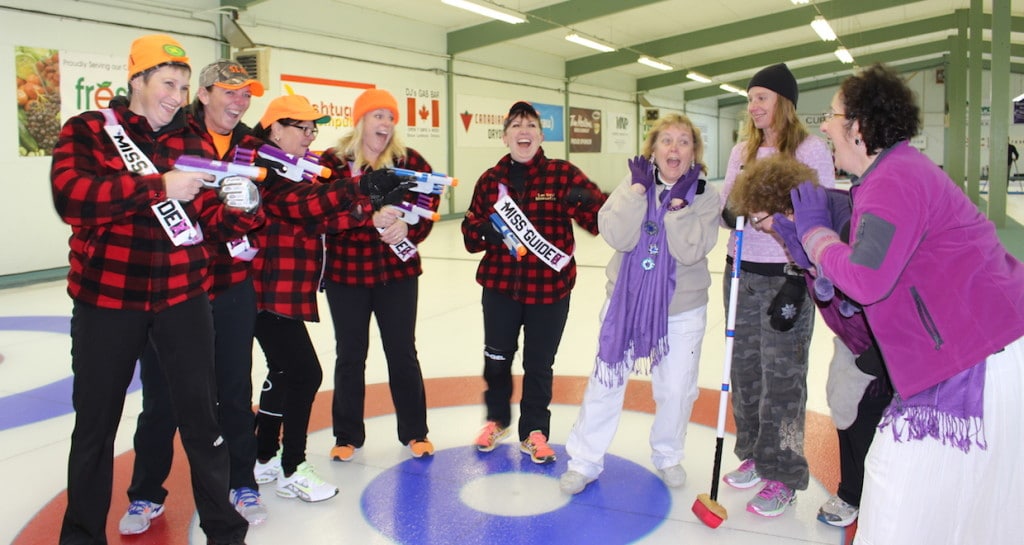 And best of all, when the curling, pledging and fundraising were done, the committee presented a $76,000 cheque to the SLMHC Foundation at the bonspiel’s closing ceremonies, more than $10,000 over the previous year’s result thanks in part, says Anderson, to a very supportive local business community “People in general, which includes curlers, are very community-minded and want to support local initiatives,” says Anderson. “Our first three years’ funds went toward diagnostic imaging and, partly as a result of our contributions, mammograms can be done right here at home rather than (women) having to travel four-to-five hours or waiting for the once-a-year travelling bus.” But the bonspiel benefits the local club too. This burst of activity at the beginning of the season has helped the club financially – like many clubs in smaller communities, Sioux Lookout CC has been struggling a bit of late – as participants and spectators fill up the facility and buy food and drinks. The event also attracts a few new members every year. “Our community is a shining example of generosity and working together,” says Anderson. “Money had to be raised to build the new hospital and now, for it to continue to grow, more funds are needed. We serve the North all the way to Hudson Bay. Sioux Lookout is called the ‘Hub of the North’ and that we are. Meno Ya Win in the Anishinaabe language means health, wellness, and well-being.” And that’s exactly what the Skip to Equip bonspiel aims to provide – for those curlers who take to the ice, and to the community beyond. 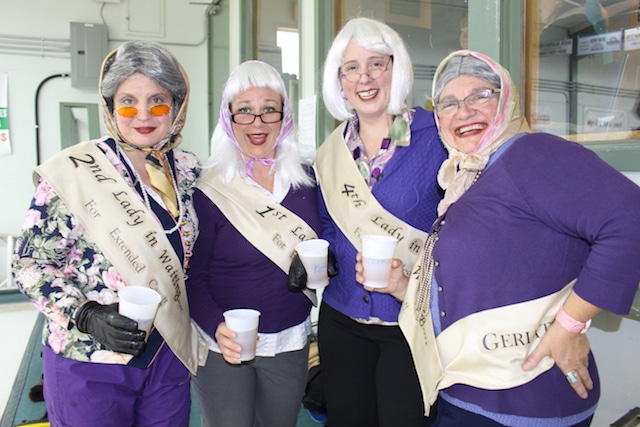 “In the last three years we have introduced a theme that has resulted in costumes to add to the fun. We are consistent with the colour purple,” says organizer Muriel Anderson. Pictured here: The Grannies (Photo courtesy Muriel Anderson)

Is your club looking for an idea for a bonspiel with purpose, like Skip to Equip? Here are a few tips from Sioux Lookout’s Muriel Anderson and the organizing committee: • Have a purpose that fits your community’s needs • Find a high-energy committee • Include several fundraisers over and above the entry fee – silent auction, penny auction, raffle, etc. • And finally, “Have other clubs contact us for more details at [email protected]”