Team Canada will begin its pursuit of curling gold on Friday at the second Winter Youth Olympic Games in Lillehammer, Norway. 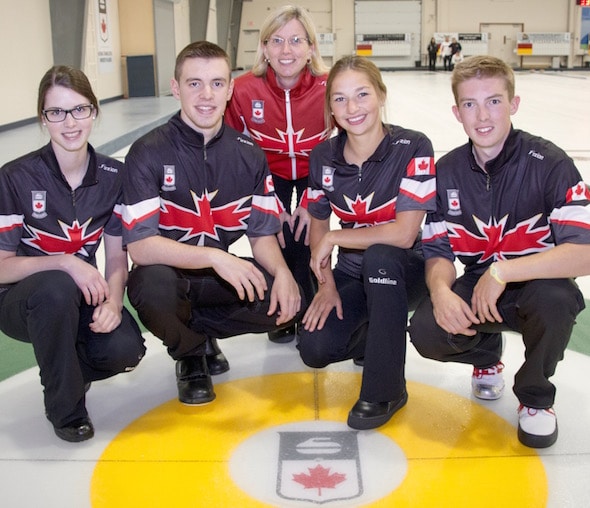 And the Canadian foursome should stand out in the 16-country field, featuring traditional mixed (two male, two female) teams, as it will have a female skip.

Mary Fay, who skipped Nova Scotia to the women’s gold at the recent Canadian Junior Championships, presented by Egg Farmers of Ontario, will call the shots and throw skip’s rocks for the Canadians in the competition for athletes born between Jan. 1, 1998, and Dec. 31, 2001.

The 17-year-old Chester, N.S., native will be backed up by her Nova Scotia teammate Karlee Burgess (Brookfield) at second, while Tyler Tardi (Surrey, B.C.) and Sterling Middleton (Fort St. John, B.C.) will line up at third and lead respectively. Tardi skipped B.C. to the men’s bronze medal at the Canadian Juniors in Stratford, Ont.

Helen Radford of Halifax will coach the team in Lillehammer.

Having female skips for mixed teams is not common; in the history of the Canadian mixed championship, only one team with a female skip has claimed gold: Shannon Kleibrink (2006 Olympic bronze-medallist) in 2004.

Round-robin competition at the Curling Hall in Lillehammer will kick off on Friday as Canada takes on Estonia at 6:30 a.m. EST. The 16 teams are split into two pools of eight. The top four teams in each pool will qualify for the playoffs, with the quarter-finals and semifinals scheduled for next Tuesday, Feb. 16, and the gold- and bronze-medal games on Wednesday, Feb. 17, at 3 a.m. EST.

Once the team competition concludes, the players will be split into mixed doubles teams, with players from different countries matched into new combinations, determined by the athletes’ position within their teams and their nations’ overall position following the traditional team competition. The mixed doubles gold- and bronze-medal games will take place on Feb. 21 at  a.m. EST.

At the first Winter Youth Olympics, in 2012 at Innsbruck, Austria, the Canadian team of Thomas Scoffin, Corryn Brown, Derek Oryniak and Emily Gray captured a bronze medal, behind gold-medallist Switzerland and silver-medallist Italy.

The Canadian team was determined based on applications from all age-eligible players in Canada, with a special focus on participants in the 2015 Canada Winter Games in Prince George, B.C.

The determining criteria for selection to Team Canada were curling skill, community leadership and academic achievement.

Live scoring, pictures, team lineups and the event schedule are available at www.worldcurling.org/yog2016

For more information about the Youth Olympics, click here.