BASEL, Switzerland — Kevin Koe and Team Canada are in familiar territory at the 2016 World Men’s Curling Championship, presented by Ford of Canada. 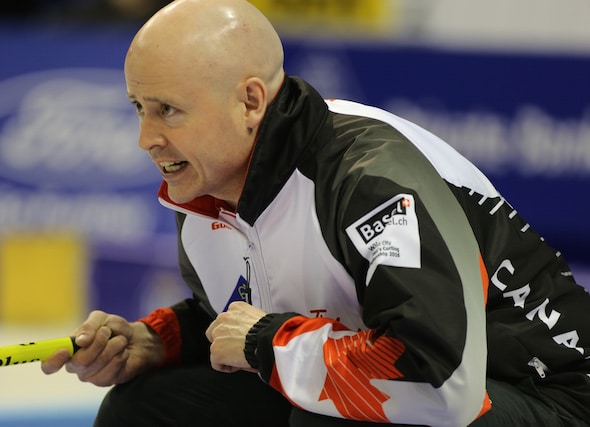 Their companions in the playoffs at St. Jakobshalle? Not so much. For the first time since 2007 at Edmonton, the world men’s playoffs won’t feature traditional powers Sweden, Norway and Scotland.

Taking their place: Denmark’s Rasmus Stjerne, whom Canada will face in the Page 1-2 playoff Friday at 1 p.m. (all times ET) with a berth in Sunday’s 9 a.m. gold-medal game on the line, Japan’s Yusuke Morozumi and John Shuster of the United States. The latter two will play in the Page 3-4 playoff Saturday at 8 a.m., with the winner moving into the semifinal Saturday at 1 p.m. against the Canada-Denmark loser.

Based on the final day of round-robin play, which featured Canada toppling Thomas Ulsrud of Norway 6-4, followed by an emphatic 8-2 crowd-silencing 8-2 victory over Switzerland’s Sven Michel, the Canadians will be favoured going into the playoffs.

But Koe and Co., despite their 10-1 round-robin record, are taking absolutely nothing for granted going into the final three days.

“It’s a pretty tough field, lots of good teams, and obviously we would have taken (10-1) at the start of the week. So it’s been a great week and now we’re looking forward to the playoffs,” said Koe, whose Calgary team — all former world champions — is rounded out by third Marc Kennedy, second Brent Laing, lead Ben Hebert, alternate Scott Pfeifer, team coach John Dunn and national coach Rick Lang. “The experience helps; I’ve won 1-2 games, lost 1-2 games. We won’t get too high or low about the outcome, but obviously we want to win that game and get to the final as soon as possible.”

Hebert watched the win over Switzerland from the alternate’s seat, giving Pfeifer a chance to play a full game. He would finish at a cool 93 per cent, but it was the skipper who had tongues wagging. Koe finished the game at 95 per cent. His last six round-robin games were scored at 89, 98, 95, 91, 93 and 95. He topped all skips at a cumulative 90 per cent. 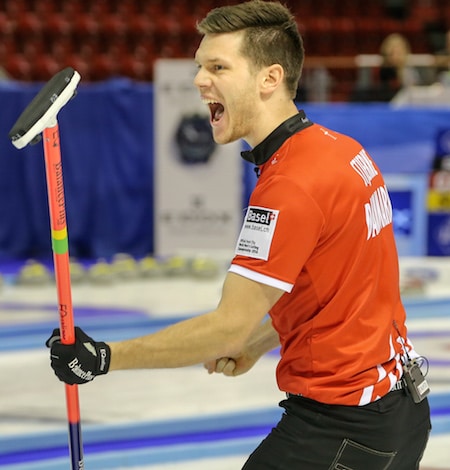 “It’s becoming a kind of a normal day of curling for him,” said Laing of Koe’s superb outings on Thursday. “It was exceptional, but that’s the way Kevin has been playing for most of the year. Certainly through the Brier and the second half of this week, everyone has the ice figured out, we’ve all played better, but Kevin’s been Kevin. There’s only one Kevin Koe in the world; he’s got shots other guys can’t make. That’s just a fact. And he’s making them right now. Hopefully he can keep it going for couple more days.”

Stjerne, it should be noted, was second among skips at 87 per cent — a far cry from the beginning of the season when the Danish men didn’t even have a spot in the European Championship ‘A’ Pool, much less the World Championship. But after winning the ‘B’ pool on home ice in Esbjerg, Denmark, in November, Denmark then beat Italy in a playoff to earn the final Euro berth into the men’s worlds.

And here, he’s been brilliant, including a double-takeout to score two to win 8-7 and eliminate reigning world champ Niklas Edin of Sweden to close out the round robin.

Denmark took Canada to an extra end last Sunday, with a shaky Canadian team scoring three in the 11th for an 11-8 win.

“We played a good game against Canada, but they seem to have picked up their pace since then but I think we got to stick to our process right now and give ourselves a chance on every shot,” said Stjerne, a former world junior champ. “Keeping the task at hand is most important and don’t focus on what’s coming because they are going to come big at us and I think we’ll just try and prepare our best.” 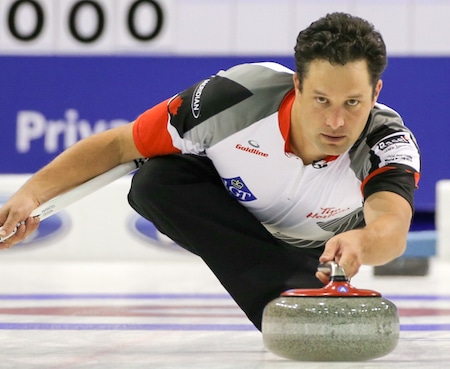 Denmark, Japan and the U.S. all finished with 8-3 records; Denmark finished second by virtue beating the other two teams during the round robin.

The Canadians, meanwhile, will be looking to keep their focus on the final three days in hopes of ending a gold-medal dry spell that goes back to 2012 here in Basel when Glenn Howard — with Laing throwing second rocks — won the world title.

“Last Sunday seems like a long time ago now; we had a couple games that we probably could have lost and we somehow snuck them out,” said Koe. “Since then, we’ve been rolling pretty good, we’ve been playing well and the ice has been getting better as well. That’s what we like to see; I like where we are right now.”