Kasner and Kalthoff are playoff bound at World Mixed Doubles

Undefeated Marliese Kasner and Dustin Kalthoff were already assured of a playoff spot when they started their game against China – also undefeated – at the 2016 World Mixed Doubles Curling Championship, but they didn’t hold anything back in a 12-2 win on Wednesday evening in Karlstad, Sweden. 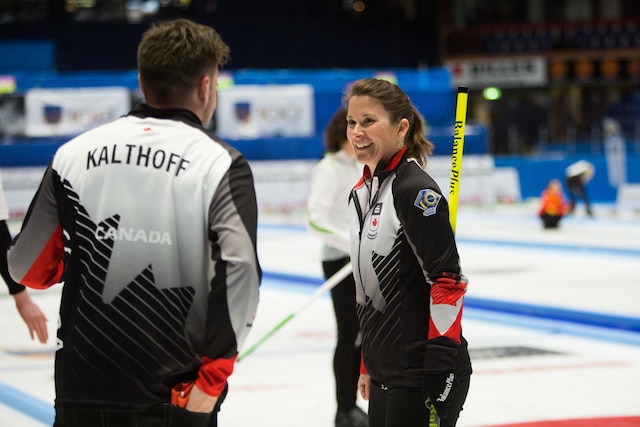 Marliese Kasner and Dustin Kalthoff are all smiles after clinching a playoff spot at the 2016 World Mixed Doubles Curling Championship in Karlstad, Sweden (WCF/Hamish Irvine photo)

With the win, Canada will be ranked at the top of Group D when playoff match-ups are determined. “We put probably our best effort of the week on the ice today,” said Kalthoff after the lopsided game. “That probably wasn’t their (China’s) best performance, considering they came into this game undefeated.” Kasner and Kalthoff, who are competing in Sweden with coach Jeff Stoughton and team leader Jim Waite, jumped ahead early with two points in the first end, followed by a steal of two in the second. It was a struggle for China’s Dexin Ba and Rui Wang, who couldn’t seem to get rocks in position, missing a number of run-backs in the early ends and giving the Canadians lots of opportunities to take advantage. In the fourth end, after a series of misses by China, Kasner made an open hit for five points to take a 9-1 lead. The struggling Chinese conceded after six ends for a 12-2 Canadian win. Kasner and Kalthoff will wrap up the round robin on Thursday against Australia’s Ian Palangio and Laurie Weeden (8:30 a.m. ET). They will then have to wait to see the playoff matchups for Friday. “We’re not looking that far ahead,” said Kalthoff about the playoff picture. “We’re just taking it one game at a time, as cliché as that sounds. Focusing on making one shot at a time, making sure we’re looking after all the little elements of our game that we can improve on, and just trying to put our best effort on the ice.” With a supportive Canadian contingent in the arena, Kasner said it helped to have fans on their side. “It’s always nice to have some cowbells ringing when we make shots,” she said. “But it’s also nice off the ice to have some family to tour around with and enjoy our time with here too.” Go to the event website, https://www.worldcurling.org/wmdcc2016, to see the games and broadcast schedule. You can also find live scoring, the schedule and team lineups.