Three-time Tim Hortons Brier champ and former world champ Nolan Thiessen is one of five new members of the World Curling Federation’s Athlete Commission, it was announced today by the WCF.

Thiessen, who currently serves as a consultant with Curling Canada, joins fellow Canadian Kelly Scott on the commission, which is an independent and consultative body that acts as the voice for elite curlers to the WCF Executive Board, Competitions and Rules Commission and the International Olympic Committee’s Athletes’ Commission. 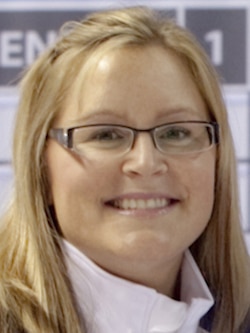 “It is my pleasure to welcome our five new members into the WCF Athlete Commission,” said WCF president Kate Caithness. “ I have no doubt these athletes will bring invaluable knowledge and experience to the Commission and work hard for the interests of our elite curlers across the globe.”

Scott was one of the original members, while Thiessen was one of five new members who were elected after an athlete vote conducted earlier this month.

“Nolan will add a valuable voice to the WCF Athlete Commission, and I know that both he and Kelly have the big picture in mind,” said Katherine Henderson, Chief Executive Officer of Curling Canada. “They both have a passion for this sport, and want to see it continue taking significant strides forward as they work collaboratively with the World Curling Federation and their peers on the Commission.”

They join Scott, Cathrine Lindahl (Sweden) and Ann Swisshelm (U.S.A.) on the Commission. Lindahl, who recently was elected as a new member of the WCF Board, also serves as the liaison between the Athlete Commission and the Board.

“This is a wonderful opportunity to work with an amazing group of athletes,” said Thiessen. “We saw at the WCF Sweeping Summit last May what can happen when people from around the world work together with a common goal. I’m really looking forward to the conversations we’ll have as a group as we offer our various insights from our competitive experiences.”

“It’s been a wonderful experience being on the WCF Athlete Commission, and I know Nolan and the other new members will have a great deal to offer,” added Scott.  “As a group, we can draw on our collective experiences and perspectives and strive to have a positive impact on our game.”

The eight members of the Athlete Commission share between them the following interest groups and cover the WCF’s three geographical zones:

The Athlete Commission election was held over a two-week period and athletes who have competed in curling or wheelchair curling events at the Olympic or Paralympic Winter Games, the Men’s, Women’s, Mixed Doubles or Wheelchair Curling World Championships in the last eight years were eligible to vote.

Initially only four athletes were elected — Forge, McDonald, Murdoch and Thiessen — however, the WCF Board unanimously approved a fifth new member to give a better geographical balance, particularly with the next Olympic Winter Games being held in the Pacific-Asia Zone. As a result of this decision Japan’s Morozumi was welcomed onto the Commission.

For the full list of 2016 nominees and their CVs, visit, www.worldcurling.org/athlete-commission-nominees