Sweeting seeks to double up on victories at Wall Grain Classic

While the majority of teams were knocked out of the Grand Slam Tour Challenge on Saturday night, there wasn’t exactly a stampede to the Cranbrook, B.C. airport on Sunday morning. Instead, many players skipped the airport exit and drove right on to neighbouring Kimberley, where another big event awaited. 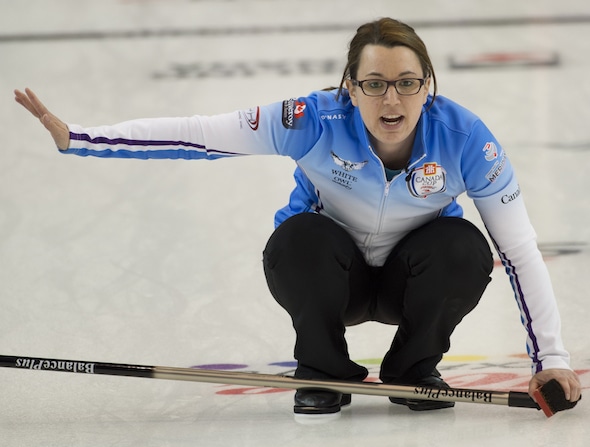 The 2016 Wall Grain Mixed Doubles Classic kicked off Monday morning, featuring many of the players from the weekend’s Slam event. The 24-team field boasts a who’s-who of Olympians, Tim Hortons Brier and Scotties champs, Canadian mixed doubles winners, and even some of Sunday’s Grand Slam champions.

As usual, there will be points and money on the line, but also a bigger prize. The winner of the Wall Grain Classic will be automatically entered into the Mixed Doubles Olympic Trials as one of four regional qualifying bonspiel winners. This makes the appeal a bit greater, especially for those coming off a week-long Grand Slam event.

Scores are being posted HERE.

Edmonton’s Val Sweeting took home the big prize in Cranbrook, but barely had time to celebrate. She’s on the ice in Kimberley with an unlikely partner, Jeff Stoughton. Not only is Stoughton filling in for the injured Brad Gushue, he’s in charge of Canada’s mixed doubles competitive development.

Rachel Homan (Ottawa) and John Morris (Calgary), winners of the Canad Inns Mixed Doubles Championship last month, have already secured their trials berth, but will be teaming up again this week. Both left the GSOC Tour Challenge playoffs earlier than expected, and will be looking for a better result in Kimberley.

Many of the other entries look just as impressive. Winnipeg’s Jennifer Jones is teaming up with husband Brent Laing, both of whom with multiple Canadian championships on their resume. The same goes for Kaitlyn Lawes and Marc Kennedy and the tandem of Jill Officer and Pat Simmons. The fourth Jones teammate, Dawn McEwen had to “settle” for her husband, Manitoba champion and six-time Grand Slam winner, Mike McEwen.

The men in the field will be chasing that Olympic Trials berth, but also trying to erase some of the memories from the weekend event. The Cranbrook event was the first Grand Slam men’s final that didn’t feature a Canadian team. In fact, only one Canadian team reached the semis. That was Team Gushue, skipped by Mark Nichols (St John’s).

In the Tier 2 portion of the Tour Challenge, Kingston’s Greg Balsdon won an all-Ontario men’s final with a 5-4 victory over Glenn Howard of Penetanguishene, while in another all-Ontario affair, Jacqueline Harrison of Mississauga won the women’s title, shading Krista McCarville of Thunder Bay 5-4 in an extra end.