While seven teams can sleep soundly tonight, knowing they’ve made the playoffs at the Wall Grain Mixed Doubles Classic in Kimberley, B.C., six went into Tuesday night still clinging to a chance at the eighth and final berth. 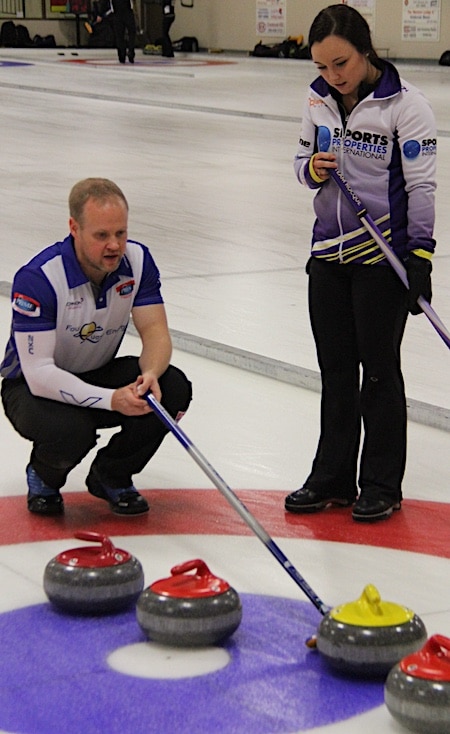 Duos such as Rachel Homan/John Morris and Emma Miskew/Tyrel Griffith have punched their ticket to the playoffs, rolling through the round robin with undefeated records. Last season’s national champions Jocelyn Peterman/Brett Gallant have also qualified, along with the team that represented Canada at the 2016 world championship, Marliese Kasner/Dustin Kalthoff (Gallant and Peterman couldn’t attend the worlds due to four-player team commitments).

But as of Tuesday night, six teams were in the hunt for the final playoff berth, and that number was whittled down to two for a late-night tiebreaker. Jennifer Jones and husband Brent Laing were playing Kelsey Rocque and Mark Nichols, with the winner going into the final eight to face Miskew/Griffith in the quarters.

On the line, aside from cash and points, is a spot in the 2018 Canadian Olympic Mixed Doubles Trials. Homan/Morris have already earned their spot by winning the Canad Inns Mixed Doubles Championship earlier this season. With a Trials berth on the line, teams are anxious to earn their spot.

“Teams realize the Olympics are getting close. So the sooner they can secure a spot in the Trials the better,” said Jeff Stoughton, the man in charge of Canada’s mixed doubles program. “Competitiveness is ramping up.”

Many of these competitors came directly from the Grand Slam event on the weekend, and are now playing their ninth or 10th games this week. Stoughton acknowledged that may be a factor.

“A little fatigue for sure,” he said, “But once you hit the ice no player wants to lose, so they find that second gear.”

Tiebreakers will wrap up late Tuesday night, and playoffs will start first thing on Wednesday morning. CLICK HERE for scores.