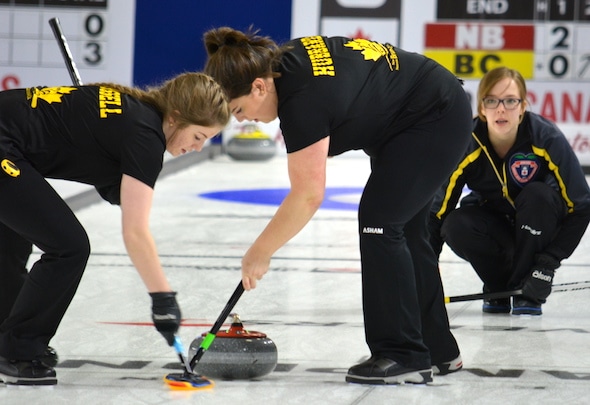 But unofficially, there’s a fifth member — Crook’s late older brother Cody — and that team is looking like a playoff contender through three days of action at the Archie Browning Sports Centre.

Just over a year ago, during the 2016 New Brunswick Junior Championships, Cody passed away at the age of 24 after a long struggle with cancer.

It happened two hours before Crook’s team was to go for a third straight win at the 2016 provincials. A family meeting ensued, and it was decided that Samantha should keep on playing.

Samantha Crook shows off the team jacket with the name of her late brother stitched on the inside. (Photo, Curling Canada/Al Cameron)

“It’s what he would have wanted,” said Crook, a 19-year-old University of New Brunswick student. “And I was thinking about my team, too; I didn’t want to leave them high and dry. I know they would have understood, but they were so supportive. They really helped me through it. Cody didn’t curl, but he always supported me.”

The team would play six more games, finally losing to Justine Comeau in the final.

“It’s kind of a blur,” admitted Crook. “I’m a bit surprised we did as well as we did. It was mostly my team.”

A year later, though, the three remaining players — Crook, vice-skip Julia Hunter and lead Kayla Russell (second Danielle Hubbard is new this season) — were, quite simply, on a mission.

And here in Victoria, the team has played superbly — the latest evidence an emphatic 9-6 win over former Canadian junior champ Corryn Brown and her B.C. team on Monday night to improve to 3-1 and take a step closer to qualifying for the championship round.

B.C. had taken control early by scoring four in the second end, but that didn’t deter New Brunswick, which came back with single points in the next two ends, a steal of three in the fifth end and one more in the sixth.

“Strong,” said an emotional Corbin, referring to her performance last year under obviously trying circumstances. “I’ve coached her for her whole junior career. Strong. I had to hold her when it was over. She was broken.”

She is no longer, and the team is closer than ever to achieving its curling dreams — doing so wearing New Brunswick jackets with the name “Cody” stitched in a bright yellow on the inside.

“I didn’t know it was going to happen,” said Crook. “It meant a lot to see Cody’s name on our jackets. It just goes to show how much they care; we’re more like a family than a team. And it feels like he’s with me. He’d be happy to see me here.”

In other women’s play Monday, Ontario’s Hailey Armstrong (Ottawa) ran her win streak to five with a 6-4 win over Quebec’s Camille Boisvert (3-2; Lévis); the win clinched a berth out of Pool A into the championship round for Ontario.

In Pool B, Saskatchewan’s Kaitlyn Jones (4-1; Regina) also clinched a championship round berth with an 11-2 win over Zoey Walsh of the Northwest Territories (0-4; Hay River).

On Monday night, P.E.I. was a 9-6 winner over Alberta, getting steals of one in the ninth and two in the 10th en route to the victory.

For the women, the 14 teams are split into two seven-team pools. The top four in each pool advance to the championship round, carrying forward their full won-lost records, while the other teams play in a seeding round to determine the pools for the 2018 Juniors in Shawinigan, Que.

For the men, since Yukon is not represented this year, they are split into one seven-team and one six-team pool. Following the round robin within their pool, the top four teams in each advance to the championship round but will carry forward only their won-lost records amongst the qualifiers.