With one game left in the round robin, Kelsey Rocque and her University of Alberta Pandas foursome are headed for the playoff round after notching two more wins and climbing into a tie for first place at the 2017 Winter Universiade in Almaty, Kazakhstan on Friday. 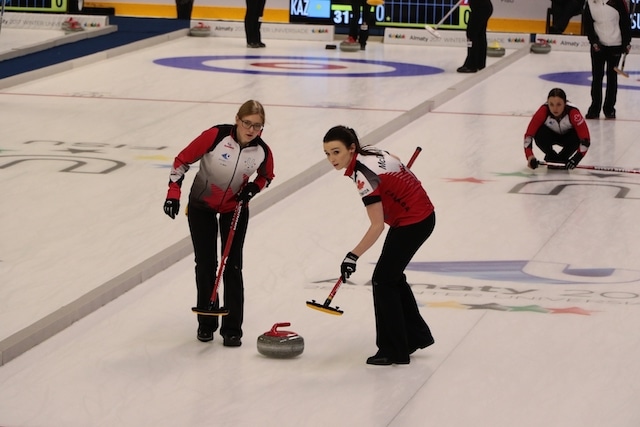 Rocque, backed by vice-skip Danielle Schmiemann, second Taylor McDonald, lead Taylore Theroux and coach Garry Coderre, started the day by cruising to a 13-2 over host country Kazakhstan’s Ramina Yunicheva. “I think it’s very important for new countries (like Kazakhstan) to join our sport,” said Coderre, putting the game into perspective. “It’s tough in this kind of environment because everyone is here in a very competitive atmosphere. I’m very proud of the girls today because they didn’t try to run up the score. They tried to stick with their own game. We knew it was going to be a hard game to play because of the circumstances, but I felt they handled themselves with character, they allowed the opposition to make some shots that they needed to make. On our end, we just kept working on things that are important to us.” The Canadians followed up with a strong performance in the evening draw, stealing three points in the ninth end to score an 8-2 victory over South Korea’s Eunjung Kim. “I think we’re peaking at the right time,” said Rocque. “We’ve been playing well the last couple of games and that’s a good sign this late in the week. That team was a really good team, we see them on (the World Curling Tour) a lot. To come away with a win like that against them is pretty big for us.” “To be honest I was concerned about this game (against South Korea) because of the game we had this morning,” said Coderre. “You sort of get out of your flow and what your systems are. To be able to come back tonight against a very good team and bring our systems and strategies and tactics all back into play, that was impressive. We’re on the right track heading into the playoffs, there’s no doubt about that.” In the men’s competition, Aaron Squires and his Wilfrid Laurier Golden Hawks team of vice-skip Richard Krell, second Spencer Nuttall, lead Fraser Reid, alternate Russell Cuddie and coach Jim Waite lost 8-2 to Czech Republic’s Lukas Klima. Squires led 3-1 at the break, but Klima stole five points in the next two ends to put the game out of reach. 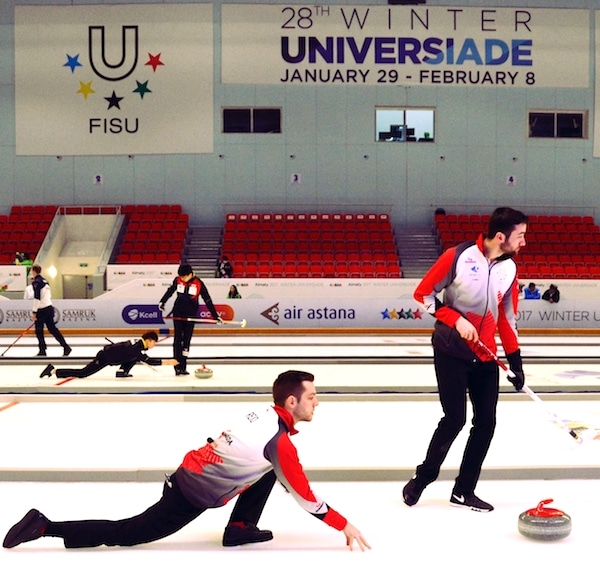 “We won the draw to the button, which hasn’t happen often this week, forcing us to play from behind in a lot of our games,” said Waite after the loss. “Unfortunately, we were in a position to score two, even three in the first end, and we ended up getting only one. Even in the sixth, we were in a position to score. It’s just the way it’s gone all week for us.” With the fourth loss, Canada slips to a four-way tie for fifth place in the standings, but that doesn’t mean the playoffs are out of reach. “We’re still in it,” Waite said. “We had a good team meeting after the game and we’re staying positive. The standings are so close, we win two tomorrow, we could end up in a tie-breaker.” The round robin wraps up on Friday, with the men going up against South Korea’s Sehyeon Seong (Friday 10 p.m. EST) and Norway’s Steffen Walstad (8 a.m. EST). The women will face Norway’s Ingvild Skaga (3 a.m. EST) in their last game before heading to playoffs. Live scoring will be available on the official event website, almaty2017.com/. The medal-round games will be shown on www.livefisu.tv/