ST. CATHARINES, Ont. — Most skips at the Scotties Tournament of Hearts will tell you they keep their focus on the here and now, and that they don’t even know whom their next opponent is. 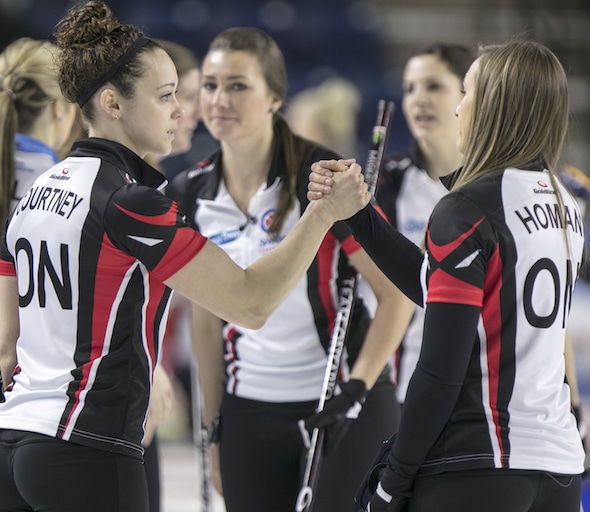 Manitoba skip Michelle Englot, on the other hand, didn’t even try on Thursday morning to maintain that facade.

Moments after a 7-2 dismantling of B.C.’s Marla Mallett (1-9; Maple Ridge) at the Meridian Centre, Englot and her 9-1 team from Winnipeg were already in prep mode for a Thursday night showdown with Ontario’s unbeaten Rachel Homan (10-0; Ottawa) — 7:30 p.m. ET in what will undoubtedly be a lively arena, and playing for a national television audience.

“Oh, I know — I look at the schedule. I’m not going to lie,” said Englot with a smile. “We know who we’re playing next.”

“We feel really good; we’ve had a strong week but the tougher games are yet to come,” said Homan. “Everyone will be playing better and better as the week goes on, and we’ll have a tough one tonight.”

An Ontario victory would clinch the 1-2 game berth — the winner of that game would go straight to Sunday’s 7:30 p.m. championship final.

A Manitoba victory, meanwhile, would leave both teams with 10-1 records to close out the round robin. If Canada wins its final three games — against Northern Ontario’s Krista McCarville (5-3; Thunder Bay) at 2:30 p.m. today; against Saskatchewan’s Penny Barker (0-8; Moose Jaw) tonight at 7:30 p.m.; and against Alberta’s Shannon Kleibrink (5-4; Okotoks) on Friday at 9:30 a.m — a three-way tie would be created. The teams would be 1-1 in head-to-head play against each other (the first tiebreaker), so the cumulative pre-game last-shot draw distances would be used to rank them first through third, with the best two distances getting into the Page 1-2 game.

Of course, that scenario could be rendered moot later tonight.

“We just need to go out and play our game,” said Englot. “Rachel obviously is a great hitter, so we just need to get rocks in great positions — not give her any doubles for three and things like that. Rock position will be critical, playing our game and putting some pressure on them early.”

Homan has no plans to change her game plan for Manitoba — understandable considering the existing plan has netted 10 straight victories.

“We don’t change our game,” said Homan. “We know some tendencies (of other teams) from throughout the week, but that’s what our support team is for. We just focus on our game.”

Games on Thursday were once again affected by dramatically unseasonable warm weather outside producing frost on the ice, leading to Chief Ice Technician Dave Merklinger’s decision to use an unprecedented fifth-end-break scrape and re-pebble of the ice to help maintain conditions for the second half of the games.